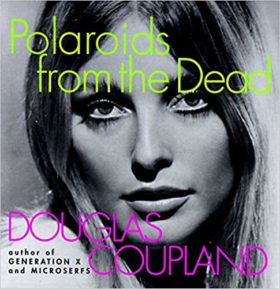 Polaroids from the Dead

Synopsis: Reflecting “an early 1990s worldview that seems time-expired” Douglas Coupland mixes fact with fiction within the three parts of Polaroids from the Dead to make up a thought-provoking time capsule well worth your time.

Declassified by Agent Palmer: Polaroids from the Dead by Coupland is a Thought-Provoking Time Capsule

The pieces in this book reflect an early 1990s worldview that seems time-expired now–jettisoned behind us like sparkling chunks of Apollo rocket tumbling back to earth.

This book–comprised of both fiction and nonfiction–explores the world that existed in the early 1990s, back when the decade was young and had yet to locate its own texture.

This book is mainly an examination of people and places I found fascinating (for whatever reasons we develop fascinations) during this brief window in time.

“I mean, if the Soviets really wanted to roast the Bay Area,” says Todd,” they didn’t need a bomb. A hibachi and a few drunk teenagers would have been way cheaper.”

“Life is so serious,” Caroline had told Mario when they first met at Katie’s garage sale. “One screwup and you’re doomed. I honestly think the world is a harsher place now than when my mother was a hippie back in the sixties. The stakes are so unimaginable now.”

She feels that useful truths have been abandoned over the past years, that modern your people aren’t being taught the right words to ask the right questions.

Dead concerts. Without them, the sixties would be extinct. Ben has used his money to follow the Dead around the world over the past years: Cairo, Dijon, Lille, Boulder, Rotterdam . . . pursuing that ear, refusing it permission to die.

Strange how when you’re young you have no memories. Then one day you wake up and boom, memories overpower all else in your life, forever making the present moment seem sad and unable to compete with a glorious past that now has a life of its own.

Skye says, “Dad, you always complain people my age never protest about anything, but the first moment we even try to make a peep, you ex-hippies are the first to slam us, saying we’re nowhere near as passionate or effective as you were in those fucking sixties. Make up your minds., stop making us have to subsidize your disillusionment with the way you turned out.”

Lions Gate Bridge is by no means a practical bridge–it looks to be spun from liquid sugar, and, unfortunately, it now seems to be dissolving like sugar. By urban planning and engineering standards it borders on being a disaster, but then isn’t it true of life in general that nothing is more seductive than the dying starlet? The lost cowboy? The self-destructive musician?

We tolerate goodness knows how much from the people we love; the same goes for objects we love, too.

…we want the people we care about, even if they have vanished from our day-to-day lives, to find some measure of happiness. I was sad because unhappiness is something we are never taught about; we are taught to expect happiness, but never a Plan B to use in its absence.

We drove to Britannia Beach, a tiny town next to a river that floods every three years, although its people never move. They just patch up their houses and stay. People are odd.

We had a late dinner with my friend James, one of the smartest people I know. We discussed the notion of “being real” with him–and of being “hyper-real” and “post-human” and I don’t think we arrived at any definite answer, but it’s important to know people who think about these things.

Inside us there are 33⅓ records, and to make a joke about you would have been to scratch the needle across that record; irony was jettisoned.

We emerge from our mother’s womb an unformatted diskette; our culture formats us.

Strange, he thinks, how all the old tricks of success in the world–education, a broad skill base, literacy, numeracy–are no longer guarantees of anything.

…certain people have much to gain by propagating such negative discussion.

One definition of noir (again, from Mike Davis’s City of Quartz) is of “the moral phenomenology of the depraved or ruined middle classes.”

It has been said that as animals, one factor that sets us apart from all other animals is that our lives need to be stories, narratives, and that when our stories vanish, that is when we feel lost, dangerous, out of control and susceptible to the forces of randomness. It is the process whereby one loses one’s life story: “denarration.”
Denarration is the technical way of saying, “not having a life.”

In a low-information environment, pre-TV, tec., relationships were the only form of entertainment available. Now we have methods of information linkage and control ranging from phone answering machines to the Internet to mediate relationships to the extent that corporeal interaction is now beside the point.

Smugly non-denarrated locales such as Europe, now swamped by media technology taken for granted for decades in North America, now suddenly look to North America for clues or answers as to how to cope with the sensation of personal storylessness.

If life is a car traveling down the road at 55 mph, money and fame will change the color of the car, but it won’t change the speed or its direction.

With a hindsight look at Brentwood, it seems inevitable that what happened did happen, if not with O.J. then with some other cataclysm reconfigured. Brentwood’s is a landscape where too many unraveling and overpowering factors collide; it is a municipal and psychic bevatron, a smashing together of fame and paranoia and desire and bodies and money and power, and race and denial and media overload and all of the machinery of late-twentieth-century living.

Nothing in the world can take the place of persistence.
Whoever wants to reach a distant goal must take small steps.
Courtesy is the password to safety.
More Fortunes >