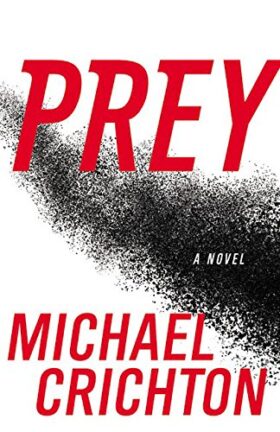 Synopsis: In the Nevada desert, an experiment has gone horribly wrong. A cloud of nanoparticles—micro-robots—has escaped from the laboratory. This cloud is self-sustaining and self-reproducing. It is intelligent and learns from experience. For all practical purposes, it is alive. It has been programmed as a predator.
It is evolving swiftly, becoming more deadly with each passing hour.
Every attempt to destroy it has failed.
And we are the prey.

Declassified by Agent Palmer: Prey Highlights Man’s Folly in the Face of Technology

In the Nevada desert, an experiment has gone horribly wrong. A cloud of nanoparticles—micro-robots—has escaped from the laboratory. This cloud is self-sustaining and self-reproducing. It is intelligent and learns from experience. For all practical purposes, it is alive. It has been programmed as a predator.
It is evolving swiftly, becoming more deadly with each passing hour.
Every attempt to destroy it has failed.
And we are the prey.

The total system we call the biosphere is so complicated that we cannot know in advance the consequences of anything that we do.
That is why even our most enlightened efforts have undesirable outcomes–either because we did not understand enough, or because the ever-changing world responded to our actions in unexpected ways. From this standpoint, the history of environmental protection is as discouraging as the history of environmental pollution. Anyone who is willing to argue, for example, that the industrial policy of clear-cutting forests is more damaging than the ecological policy of fire suppression ignores the fact that both policies have been carried out with utter conviction, and both have altered the virgin forest irrevocably. Both provide ample evidence of the obstinate egotism that is a hallmark of human interaction with the environment.

We think we know what we are doing. We have always thought so. We never seem to acknowledge that we have been wrong in the past, and so might be wrong in the future. Instead, each generation writes off earlier errors as the result of bad thinking by less able minds–and then confidently embarks on fresh errors of its own.
We are one of only three species on our planet that can claim to be self-aware, yet self-delusion may be a more significant characteristic of our kind.
xii there are many people

There are many people, including myself, who are quite queasy about the consequences of this technology for the future. We are talking about changing so many things that the risk of society handling it poorly through lack of preparation is very large. – K. Eric Drexler

There’s one problem with all psychological knowledge-nobody can apply it to themselves. People can be incredibly astute about the short- comings of their friends, spouses, children. But they have no insight into themselves at all. The same people who are coldly clear-eyed about the world around them have nothing but fantasies about themselves. Psy- chological knowledge doesn’t work if you look in a mirror. This bizarre fact is, as far as I know, unexplained.

Considering that evolution has been studied for a hundred and fifty years, it was surprising how little we knew about it. The old ideas about survival of the fittest had gone out of fashion long ago. Those views were too simpleminded. Nineteenth-century thinkers saw evolution as “nature red in tooth and claw,” envisioning a world where strong animals killed weaker ones. They didn’t take into account that the weaker ones would inevitably get stronger, or fight back in some other way. Which of course they always do.

Human beings tended to believe that without central command, chaos would overwhelm the organization and nothing significant could be accomplished.

It was a human blind spot. We looked at the world around us as a snapshot when it was really a movie, constantly changing. Of course we knew it was changing but we behaved as if it wasn’t. We denied the reality of change. So change always surprised us. Parents were even surprised by the maturing of their own children. They treated them as younger than they really were.

They didn’t understand what they were doing.
I’m afraid that will be on the tombstone of the human race.
I hope it’s not.
We might get lucky.

Good clothes open many doors. Go Shopping.
To let another into your heart, first let yourself in.
Fame and fortune are coming your way.
More Fortunes >