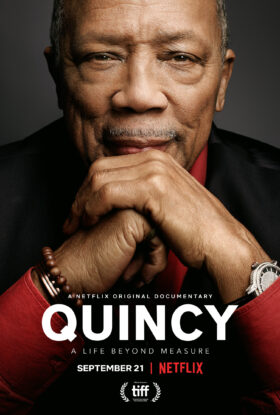 Tagline(s): A Life Beyond Measure
Q: musician, producer, activist – a man for our times

Rashida: Do you think it’s easier to be up late in LA, to work by yourself?
Quincy: Yeah, absolutely.
Rashida: ‘Cause nobody’s up, right?
Quincy: Absolutely. Well, nobody’s up that late anyway, so I always wrote at night.
Rashida: Right.
Quincy: The muses come out then, you know?
Rashida: Right.
Quincy: Everybody used to say, “Keep your score paper and pen right near you, ‘cause if you’re not up, God will take it down the street to Mancini.”

Quincy: I haven’t been sleeping a lot, no. Too much on my mind, you know. It’s hard to turn it off.

I had no control over where I lived, no control over my sick mother. I couldn’t control the angry whites who still called me “nigger” when they caught me alone on the street. But music was on thing I could control. It was the one thing that offered me my freedom.

Rashida: Dad, how do you deal with your ego and your art?
Quincy: You know… you need confidence, sure. That’s… I’m not denying that.
Rashida: Yeah.
Quincy: But the… an ego is usually just, uh… overdressed… insecurity. I think you have to dream so big that you can’t get an ego. ‘Cause you’ll never fulfill all those dreams. There’s always more to come and learn.

Quincy: Count Basie was like a father to me. “Learn to deal with the valley’s Quincy,” he advised. “The hills will take care of themselves.”

Quincy: When composers get started on a film, I think they spend the roughest parts of it scraping away… the bullshit, you know, in their life. They have to really scrape away so there’s nothing left but truth. Because I don’t think you can write, can’t create anything without… feeling right with the truth. You have to find something to grab a hold of to believe in, or you can’t write. I can’t say, “This’ll be good enough,” or your senses won’t react. You make a desperate escape to get down into the subconscious, which I really think all the goodies come from.

Quincy: I know it’s a sickness, in a way. You can call it “workaholic” or whatever it is, but it’s, uh… it’s the only way I know.

Even the greatest of whales is helpless in the middle of a desert.
Let’s finish this up now, someone is waiting for you on that.
Good clothes open many doors. Go Shopping.
More Fortunes >