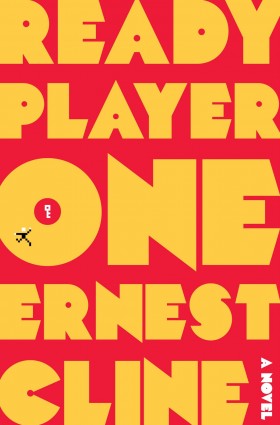 Ready Player One (A Novel)

Synopsis: In the year 2044, reality is an ugly place. The only time teenage Wade Watts really feels alive is when he’s jacked into the virtual utopia known as the OASIS. Wade’s devoted his life to studying the puzzles hidden within this world’s digital confines—puzzles that are based on their creator’s obsession with the pop culture of decades past and that promise massive power and fortune to whoever can unlock them.

But when Wade stumbles upon the first clue, he finds himself beset by players willing to kill to take this ultimate prize. The race is on, and if Wade’s going to survive, he’ll have to win—and confront the real world he’s always been so desperate to escape.

After all, the people of Planet Earth had other concerns. The ongoing energy crisis. Catastrophic climate change. Widespread famine, poverty, and disease. Half a dozen wars. You know: “dogs and cats living together… mass hysteria!”

Being human totally sucks most of the time. Video games are the only thing that make life bearable. -Anarok’s Almanac, Chapter 91, Verses 1-2

Playing old videogames never failed to clear my mind and set me at ease.

That there was nothing so wrong in the world that we couldn’t sort out by the end of a single half-hour episode (or maybe a two-parter, if it was something really serious).

She used to have to force me to log out every night, because I never wanted to return to the real world. Because the real world sucked.

To quote the Almanac: “People who live in glass houses should shut the fuck up.”

The van was my refuge. My batcave. My Fortress of Solitude,

The moment IOI took it over, the OASIS would cease to be the open-source virtual utopia I’d grown up in. It would become a corporate-run dystopia, and overpriced theme park for the wealthy elitists.

The Ontologically Anthropocentric Sensory Immersive Simulation was a big place.

“You’re evil, you know that?” I said.
She grinned and shook her head. “Chaotic Neutral, sugar.”

I’m not crazy about reality, but it’s still the only place to get a decent meal. – Groucho Marx

I beg to differ. Everything about our online personas is filtered through our avats, which allows us to control how we look and sound to others., The OASIS lets you be whoever you want to be. That’s why everyone is addicted to it.

In real life, I was nothing but an antisocial hermit. A recluse. A pale-skinned pop culture-obsessed geek. And agoraphobic shut-in, with no real friends, family, or genuine human contact. I was just another sad, lost, lonely soul, wasting his life on a glorified videogame.

“No one in the world ever gets what they want and that is beautiful.”

The once-great country into which I’d been born no resembled its former self in name only. It didn’t matter who was in charge. Those people were rearranging deck chairs on the Titanic and everyone knew it.

We’d connected on a purely mental level. I understood her, trusted her, and loved her as a dear friend. None of that had changed, or could be changed by anything as inconsequential as her gender, or skin color, or sexual orientation.

“Damn, girl,” Aech said. “You’ve got some serious knowledge.”
“Thanks,” she said. “It helps to be an obsessive-compulsive geek. With no life.”

That was when I realized, as terrifying and painful as reality can be, it’s also the only place where you can find true happiness. Because reality is real. Do you understand?

Look forward to great fortune and a new lease on life!
A difference, to be a difference, must make a difference.
Even the greatest of whales is helpless in the middle of a desert.
More Fortunes >