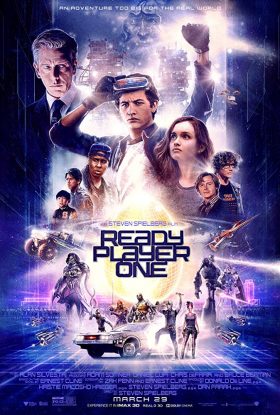 Tagline(s): A better reality awaits.
Break Free
An adventure too big for the real world
Accept your reality… or fight for a better one.

Based On: Based Ready Player One by Ernest Cline.

Synopsis: When the creator of a virtual reality called the OASIS dies, he makes a posthumous challenge to all OASIS users to find his Easter Egg, which will give the finder his fortune and control of his world.

Declassified by Agent Palmer: Ready Player One Is a Great Film (The Slight Spoiler Review with Old Man Rant)

Anorak: In the form of my avatar, Anorak the all knowing. I created three keys. Three hidden challenges test worthy traits, revealing three hidden keys to three magic gates. And those with the skill to survive these strengths will reach the end, where the prize awaits.

Halliday: I created the OASIS because I never felt at home in the real world. I just didn’t know how to connect with people there. I was afraid for all my life, right up until the day I knew my life was ending. And that was when I realized that… as terrifying and painful as reality can be, it’s also… the only place that… you can get a decent meal. Because, reality… is real.

Parzival: Some people can read War and Peace and come away thinking it’s a simple adventure story…
Art3mis: Others can read the ingredients on a chewing gum wrapper and unlock the secrets of the universe.

Halliday: Maybe we should stop talking about it and start showing it. If you all want to reach under your seats, you’ll find there’s nothing there.

Parzival: A creator who hates his own creation. A hidden key: a leap not taken. Retrace your steps, escape your past. And the key of Jade will be yours at last.

I-R0k: No man is a failure who has friends.

Anorak: The keys aren’t just laying around under a rock somewhere. I suppose you could say they’re invisible, hidden in a dark room that’s at the centre of a maze, that’s located somewhere up here.

Wade: The High Five took over the OASIS, and the first thing we did, was sign Ogden Morrow to a non-exclusive consultancy. The salary, per his demand, was 25 cents. One quarter. With his guidance, our second move was to ban any loyalty centers from accessing the OASIS. IOI had no choice. They shut ’em all down. The third thing we did wasn’t as popular. We closed the OASIS on Tuesdays and Thursdays. I know it sounds like a weird move, but, people need to spend more time in the real world. ‘Cause, like Halliday said, reality, is the only thing. That’s real.

Even the greatest of whales is helpless in the middle of a desert.
Your moods signal a period of change.
You are interested in higher education, whether material or spiritual.
More Fortunes >