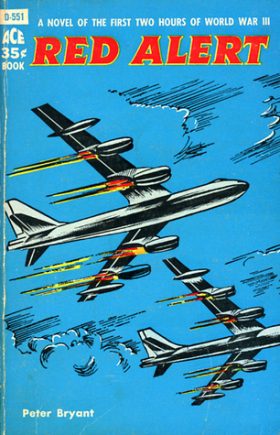 Tagline: A Novel of the First Two Hours of World War III

Synopsis: SAC ATTACK! Every minute of every hour of every day, there are American bombers in the air, loaded with H-bombs, ready to fly into action at the mere spark of the right radio signal. These are the planes and men of the Strategic Air Command. What happens once that signal flashes is described vividly in this tensely dramatic novel. The command came to the men of the 843rd Wing, high in the air near the Soviet border. Asking no questions, obeying their standing orders, they headed straight towards their assigned targets. Has America already been attacked? Or was it the action of a single determined general, and unauthorized by the Pentagon and the president? RED ALERT is the story of the two tensest hours in human history.

Declassified by Agent Palmer: Red Alert by Peter Bryant is a Chilling Tale and a Must Read

In the commander’s office of the Senora, Texas Air Force Base, the red line telephone clamored loudly and imperatively. Major Howard stiffened as General Quinten reached for it, held the smooth red plastic to his ear, and listened for a few moments. His face was pale, his eyes haunted. He said, “Okay, I hear you. All right,” and reached out to replace the receiver.

The general’s hands were shaking badly and he had difficulty in getting the instrument back to its cradle. At once Howard knew that this was it. This time it was real. An attack on the United States was under way, and the bludgeon of massive retaliation was about to start its swing.

Quinten said quietly, “We’re in a shooting war. Get the word out to the boys. Put the base on Warning Red conditions.”

And that was the start of the most nightmarish two hours the world will ever know!

And it’s also the start of the most feverishly suspense-filled novel you’ll ever read!

This story takes place the day after tomorrow.

Apart from one short scene at Strategic Air Command H.Q. in Omaha, the action varies between three main scenes.

The Commanding General’s office at Senora Air Force Base, Texas.

The War Room at the Pentagon, Washington.

This is the story of a battle. A battle fought in the skies over the Arctic and over Russia, on an American Strategic Air Command Base, and in the minds of men. Its duration was only two hours.

It is a chaotic story, because battles usually are chaotic. It is a pitiless, cruel story, because pitilessness and cruelty are inherent qualities of battle, and especially a battle fought out with modern nuclear weapons.

Most important of all, it is a story which could happen. It may even be happening as you read these words. And then it really will be two hours to doom.

Yours and mine and every other living creature’s.

But when the wing rotated overseas, carrying of the actual weapons was mandatory, as it was on any of the training missions which took the individual aircraft to their X points. And at those times fear was an inseparable companion on the flight. Nt fear for themselves, but for the world.

And when the strain became too much, when there were signs that the human spirit could endure no more of the hideous responsibility, men were quietly relieved and re-assigned to duty where their minds could slowly come back to normal under the healing warmth of the knowledge that, for a time at least, they would not have to be called on to destroy upwards of five million human beings at the press of a button.

And at once Howard knew that this was it. This time it was real. An attack on the United States was under way, and the bludgeon of massive retaliation was about to start its swing.

It was his belief that the 843rd on its own could destroy the Russian capacity to wage a global war.

But Quinten had long lost faith in the higher echelons. He did not blame the generals above him so much as the statesmen above them.

Secrets were made in other places. Here in the War Room, they were displayed.

“Gentlemen, thirty minutes ago, without any orders or authorisation, one of my base commanders sent out attack orders to a wing under his command. The wing concerned was on a simulated mission which took them to the point where, in time of war, they could have begun the first part of their attack procedure. In Strategic Air Command we call this point the X point.

He said quietly, “General, no system yet devised is proof against any and all human failings. SAC plans were as accident proof as they could reasonably be made.” – Keppler

The modern bomber is an infinitely more complex machine than the crude Fortresses and Lancasters of World War II.

It was another example of the way the mind will push the unpleasant things into the background. Like the envelope you fail to open because you know it contains a bill you can’t really afford to pay. Like the politicians who manage to convince themselves during face-to-face meetings that the other man is friendly, when they know that yesterday he attacked them bitterly, and will probably do so again tomorrow.

“He said war was too important a matter to be left to generals.”

In every dictatorship which is tottering, there is an urge towards destruction.

Where did the strictly military line of capability end, and the political line of probability start?

He had realised early in his political life that alliances were dangerous and enmities even more so.

He did not conquer the fear, but he pushed it far enough in the background so he could continue to function efficiently.

Maybe the dead were lucky, Brown thought. At least they did not have to carry the shapeless weight of pain whose torturing fingers were pressing ever heavier on his back.They did not have to carry the responsibility of taking a crippled bomber in to its bomb point, and muster the determination to get there, which alone would enable the heavy odds against to be beaten.

Somehow it did not make sense to forge a weapon of the finest metal, temper it to an infinite hardness, polish it to a dazzling perfection, only to find that it could not in any case be employed without destroying its wielder as surely as the enemy it struck down. Well, he thought, That was the twentieth century. They had to live with it. Or rather, he amended, to die with it. – Franklin

In Moscow it was now dark, in Washington just light.The Pentagon and the Kremlin were separated by eight hours of time, and forty years of mutual mistrust. The link between them was a fragile and tenuous as the radio beam that carried their messages to and fro.

Your moods signal a period of change.
Let’s finish this up now, someone is waiting for you on that.
Even a broken clock is right two times a day.
More Fortunes >