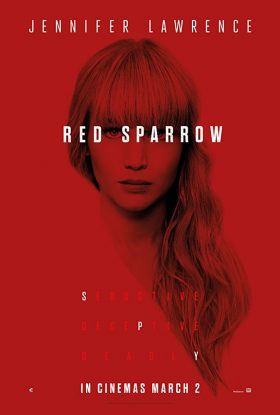 Tagline(s): Seductive. Deceptive. Deadly.
I Know Your Secrets.
The road to forgiveness begins with betrayal.
Seduce. Deceive. Repeat.
Her most lethal weapon is herself.

Based On: Based on the book Red Sparrow by Jason Matthews

Synopsis: Ballerina Dominika Egorova is recruited to ‘Sparrow School,’ a Russian intelligence service where she is forced to use her body as a weapon. Her first mission, targeting a C.I.A. agent, threatens to unravel the security of both nations.

“There are no accidents, we create our own fate.”

“You always had a temper…”

“There is no such thing as luck…”

“I want to be special”

“True value comes in the smallest imperfection. A defining detail that makes it worthy of collection.”

“Something will slay us all”

“Some things can’t be sacrificed.”

“The Cold War did not end, it shattered into a thousand dangerous pieces. The West has grown weak, drunk on shopping and social media. Torn about by hatred between the races, and as a result, the world is in chaos. Only Russia is willing to make the sacrifices required for victory. For there to be peace we must once again place ourselves at the head of nations. From this day forward you will become sparrows, weapons in a global struggle for power. You have been selected because of your beauty, because of your strengths, and in some cases because of your vulnerability.”

“Here we deal in psychological manipulation. You’ll be trained to determine a target’s weakness, to exploit that weakness through seduction, and to extract information.”

“You must learn to sacrifice for a higher purpose. To push yourself beyond all limitation and forget the sentimental morality with which you were raised. Or is it pride? In my experience, the proud are the first to fall.”

“Every human being is a puzzle of need. You must learn to intuit what is missing become the missing piece, and they will give you anything.”

Even the greatest of whales is helpless in the middle of a desert.
Courtesy is the password to safety.
Whoever wants to reach a distant goal must take small steps.
More Fortunes >