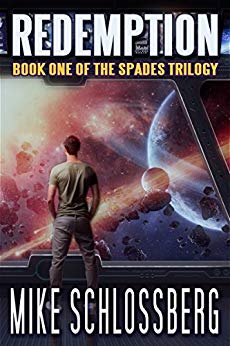 Synopsis: Twenty young people wake aboard the spaceship Redemption with no memory how they got there. Asher Maddox went to sleep a college dropout with clinical depression and anxiety. He wakes one hundred sixty years in the future to assume the role as captain aboard a spaceship he knows nothing about, with a crew as in the dark as he is. Yanked from their everyday lives, the crew learns that Earth has been ravaged by the Spades virus – a deadly disease planted by aliens. They are tasked with obtaining the vaccine that will save humanity, while forced to hide from an unidentified, but highly advanced enemy. Half a galaxy away from Earth, the crew sets out to complete the quest against impossible odds. As the enemy draws closer, they learn to run the ship despite their own flaws and rivalries. But they have another enemy . . . time. And it’s running out.

“It’s X-Wing” It’s the radar in the X-Wing computer game. You know, from Star Wars.”

“Next time you save us, try to avoid knocking me unconscious.”

“They walked on, passing computer screens embedded in the walls. Upon closer examination, Ash realized that the screens were from all technological eras. They walked past models labeled “Amiga 300,” “PowerMac 6100,” a husky “Dell Latitude” laptop and a series of increasingly small flat screens which transitioned to iPads of all sizes. Around that point, the models became less familiar to Ash, and he couldn’t help but notice Alexis seemed to be staring in disbelief.”

“Violence was a foreign concept, one reserved for people who had no better way of resolving conflicts.

“For Ash, the anxiety attacks hadn’t ‘started’ at any time. They just always had been.”

“The medication started in high school and gradually increased. For a time, it was under control, and it was in high school that Ash learned a new coping strategy: sublimation. Anxiety didn’t have to be beaten with calm thoughts or pharmaceuticals; it could be ignored with school work and clubs.”

“There could be no free time, because free time meant that the gates of his mind would crack open, eviscerating any sense of temporary peace he hand managed to obtain. Time to think was bad; thinking was the enemy. There could be no feelings, only action.”

“Not for the first time, and not for the last, the crew of the Redemption stared at each other in disbelief, each with the same question on their minds: When are you from?”

“Stop. We’re not doing this again,” Ash said, noticing Blondell’s lips thinning. “After all, arguments can only lead us to mind-blowing realizations so many times.”

“Okay, you’ve seen two computers hooked up to each other, right?”
“Sure,” Alexis said. “I’ve played tons of Warcraft that way.” It was Jameson, Daniel and Blondell’s turns to look confused. “Game. Computer game. Come on, you’ve got to have those in the future.”
“Sure,” said Blondell.
“No,” said Jameson at the same moment.
This caused more confusion, as Blondell and Jameson looked at each other in shock. In an almost tiny voice, filled with wonderment, Jameson said, “They come back?”

And remember, facing your demons doesn’t always mean beating them It just means living to fight another day.

Anxiety attacks are hell because you become so afraid of them You have them when you go to school . . . so you start to hate school and don’t want to go there anymore. And then it happens at the movie theater. And when you are driving. And when you are more than ten minutes away from home. And it gets to be like a boa constrictor. It squeezes the life out of you. It puts you in a box, and that box keeps getting smaller and smaller. The next thing you know, there’s nowhere you can go, nothing you can do.

Besides, they had barely known each other for twenty-four hours, and she had already seen him at his worst. She could never be romantically interested in him. Hell, she had just tranquilized him and dropped him into bed. Women wanted real men, right? Not big anxious balls of goo?

But crisis reveals character. I truly believe that.

“This is fun,” Ash said I wish I was always put in a life-or-death situation to save the human race and got to play babysitter to people with more issues than me.

“…you gotta look past the surface. Everyone here is struggling. Some are just better at hiding it than others.”
“Yeah, well, I’ve never been good at hiding my emotions.”
“Maybe that’s a strength,” said Daniel. “Maybe that means you’re better at facing them head on.”

“When civilization collapses, it doesn’t collapse evenly,” she said, voice steady and stare even. “We learned this the hard way.”

“Yes,” Ash confessed. “When I’ve been okay, I’ve never really been okay. It’s always there, floating around. The treat of an anxiety attack, of slipping into a funk. It never completely goes away.”

“That recovery isn’t an end state. It’s a progression. And that sometimes you succeed and sometimes you fail, but you always move back the same way.”

Was it worth it? Everything they were doing? Were they really going to be able to save mankind? Or were they just delaying the inevitable?

He was truly starting to fear that Anton had some sort of break with reality, and the concept was a terrifying one: It meant that someone who didn’t have full control over their mental faculties was in control of a powerful warship, capable of saving the planet, and by converse, capable of ending it.

“When you accept the worst, there’s nothing left to lose,” she said. “Sometimes it takes hitting rock bottom to figure that out.”

“We have all become professionals at things which are unbelievable,” Ash said. “I just hope we can finish this off.”

To everyone who has ever suffered, ever felt lost, sacred or alone. As you almost certainly figured out after reading this, depression, anxiety and I are intimately acquainted. Those two illnesses are constantly running in my background like an app in an iPhone. I won’t say I’ve figured out how to beat them. I don’t think I ever will. But I will say that I’ve learned how to manage them. How to live my life, to make it a good one, despite their presence. I hope that the struggles of Asher Maddox and his crew have helped you realize that, whatever your pain, you can be a hero.

Look forward to great fortune and a new lease on life!
You are interested in higher education, whether material or spiritual.
Today it’s okay to make a few choices by going with your instincts.
More Fortunes >