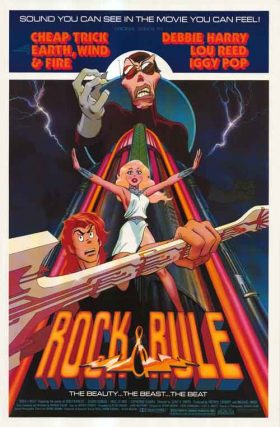 Tagline(s): Sound you can see in the movie you can feel!
The Beauty… The Beast… The Beat!

Synopsis: A malevolent rock star kidnaps a female singer to force her to participate in the summoning of a demon and her band must help her stop him.

Declassified by Agent Palmer: Rock & Rule: The Cult Classic That Never Really Was

“The War was over
The only survivors were animals; dogs, cats and rats. From them a new race of mutants evolved.

That was a long time ago…”

“MOK, a legendary superocker
has retired to OHMTOWN. There
his computers work at deciphering
An ancient code
Which would unlock a doorway between
this world and
Another dimension.

Obsessed with his dark experiment,
MOK himself searches for the last
crucial component-

Mok: Evil spelled backward is “live,” and we all want to live, don’t we?

Mok: She can sing, or she can scream. But she still pissed me off.

Dizzy: Nuke York’s only three days away.
Stretch: Gonna take us six days. We only got half a car left.

Mok: Wars have been started for less. Gentlemen, when I want your opinions, I will give them to you!

Toad: Words to the wise-guy – be nice, or be dog food! Follow?

Mok: Open your eyes! Accept my offer.
Angel: No, Mok. I couldn’t leave them for anything.
Mok: I didn’t offer you ANYTHING. I offer you EVERYTHING!
Angel: No!
Mok: Too bad. But we all have our illusions, far be it for me to take away yours.

Fame and fortune are coming your way.
Even the greatest of whales is helpless in the middle of a desert.
Things are turning for the bright side.
More Fortunes >