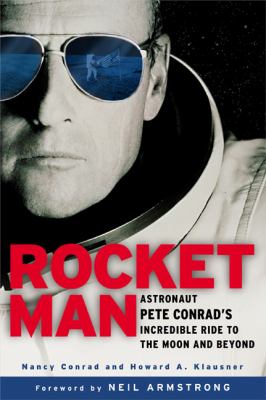 Tagline: Astronaut Pete Conrad’s Incredible Ride to the Moon and Beyond

He was the third man to walk on the Moon.
He was the first to dance on it.

He was the Rocketman.

He was, by far, the merriest prankster I ever met, simply unable to resist a good joke or yanking the chain of someone who took himself just a bit too seriously.

This book is the story of a man–a man who embodied the very spirit behind the space program. Charles “Pete” Conrad was a great pilot, a gifted engineer, a problem solver, and a natural-born leader.

Circumstances don’t make a man, they reveal him.

“So which was your best day? First solo, or walking on the Moon?”
“Neither one.” Pete twisted a knob or two, letting Dan puzzle over the pause. First carrier landing.

NASA budgeted the Gemini Program at $250 million, an (ahem) astronomical sum in 1961.

The word awesome is overused in our lexicon, tossed around about a pretty day, a good cafe latte, or a very attractive woman. But the Saturn 5 surpasses the strongest definition of the word. Awesome doesn’t even touch that bird.

There were a thousand people working into the night down here at the Cape, preparing–on a Sunday. A thousand more over in Houston. Nobody ever seemed to pay attention to the shift whistle on this job. Nobody ever wanted to leave.

This was it, and he knew it. The ride was over for astronaut Pete Conrad. He was forty-three; it was time to bring her in for a landing, and go find a new ride. Make some money, maybe. Get to know his children before it was too late. Get to know his wife again, after twenty years of going like a man on fire. At least he was going out a winner.

Walking on the Moon had been great; he wouldn’t have traded it for anything. But Skylab . . . God, he loved this beautiful flying barrel of a bird.

“Never work for money,” his father had taught him. “Be a part of something.” The older Pete got, the smarter his old man became.

Old Mac had hired Pete because he was a people guy, a pilot, and a straight shooter. Suddenly those didn’t seem to be assets in the MBA-worshiping corporate climate of the eighties. Old Mac was gone, and Pete Conrad wasn’t flying their jets much anymore. He was pushing paper around a desk.

An astronaut’s day was not nine to five–that was for damn sure. As checklist- and procedure-oriented as that work was, Pete’s life had never known routine. Not really.

“It’s just a ride, my boy. Remember that. It’s all just one big ride.”

It was so Pete, still blowin’ and goin’ at sixty-nine. OId Squarewave didn’t know how to slow down, and didn’t much care to learn. There were too many rides to take.

“If you can’t be good, be colorful.” Pete Conrad was both. And it’s fun to think, looking at the night sky, that somewhere out there, the good and colorful Rockman’s ride goes on. . . .

“Well,” she began, “as you know, he was tossed from the Mercury Program because he had an attitude problem . . .”
No, I didn’t know. Or I’d forgotten. It had been a long time since I’d read The Right Stuff, and what I didn’t know about Conrad was pretty much the sanitized, NASA-approved PR version of his life. That was the first of many consciousness shifters that day–like the fact that the Moon didn’t mean all that much to Pete. Not compared to Skylab, and the commercialization of space, the thing both he and Nancy were working on at the leading edge when he died.

Today it’s okay to make a few choices by going with your instincts.
Courtesy is the password to safety.
You are interested in higher education, whether material or spiritual.
More Fortunes >