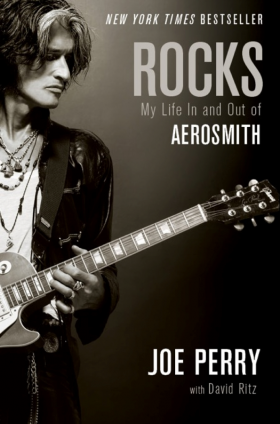 Rocks: My Life In and Out of Aerosmith

Synopsis: Before the platinum records or the Super Bowl half-time show or the Rock and Roll Hall of Fame, Joe Perry was a boy growing up in small-town Massachusetts. He idolized Jacques Cousteau and built his own diving rig that he used to explore a local lake. He dreamed of becoming a marine biologist. But Perry’s neighbors had teenage sons, and those sons had electric guitars, and the noise he heard when they started playing would change his life.

Declassified by Agent Palmer: “Rocks” by Joe Perry is a Great Memoir from One of the Greatest Guitarist

The idea that three souls sitting around a room could create this kind of a conversation without saying a word was not simply appealing, but overwhelmingly. I yearned to do exactly what they were doing.

Dylan caught my ear because his voice was unconventional.

Once I put together my first band, that urge never diminished. Ironically, that drive came from my father, who preached, If you want something badly and work hard enough, you can get it.

It was the group miracle that I sought–the sheer thrill of three or four or five musicians conducting a raucous conversation with their instruments.

If you’re an addict–and Aerosmith would eventually prove to be a band of addicts–the drugs will take you out. Ultimately the drugs have to be put down. Either you kill them or they kill you.

We thought we might be making some progress when Rolling Stone saw fit to mention our second album, saying that we were playing with “ent-up fury” and that we “maintained an agile balance between Yardbirds and Who-styled rock and seventies heavy metal.” I especially like this line: “They think 1966 and play 1974.”

In our own camp, the friction between Steven and me never stopped. After every show, the dressing room became the battleground. Tom, Joey, and Brad would watch as we went at it–Steven the perfectionist versus Joe the anarchist. Ironically, our contrary energies gave Aerosmith the edge over many other bands. But that knowledge didn’t take the sting out of the fights.

Every instrument has secret sounds buried within it. My job was to find those sounds.

My home was comfortable, but, in truth, I saw my real home as the road.

As the great blues prophet John Lee Hooker once said, “If it’s in him, it’s gotta come out.”

That’s where I met John Belushi, who had just started out on Saturday Night Live. He jammed with us till dawn. If there was ever a true rock and roller, it was John.

Our exploding popularity got to the point where even Rolling Stone had to put us on the cover–except they didn’t. They put Steeven on the cover with a sorry photo. The accompanying story was just as sorry. They wrote that “guitarist Joe Perry plugs in his guitar like a grease monkey getting ready to tune a carburetor.” They said that Steven Tyler had a voice “that makes Alice Cooper sound like Vic Damone” and that we made “brain damage music.”

I couldn’t wait to get to England. I wanted to prove to British fans that we were more than an Americanized version of English rock bands who were themselves Anglicized versions of American blues bands.

No matter how vicious the animosity between us, a physical altercation was never a threat. The line of civility between us was thing, but it existed. Something powerful kept both of us from crossing it.

But the truth is that the band never sat down and talked about our problems. When we would try to confront each other or explain our feelings, we’d wind up screaming. It was the band that broke up the band, not any outsider. None of us was willing to take a hard look at ourselves and our issues. Rather than look in the mirror, it was easier to lay it flat on the table, snort what was on it, and blame someone else.

What is the way forward?
Do I keep the Project alive?
Or do I reconsider the pledge I made when I walked away from Aerosmith swearing never to return to that madness?
Is it that madness that is calling me?
Or, beneath the madness, is it the power of Aerosmith’s blistering rock and roll that won’t leave me alone?

To shake things up, I listened to “Rag Doll,” from Permanent Vacation, backward and, strangely enough, began developing new chords that turned into “Don’t Get Mad, Get Even.”

“How ‘bout putting on a new bass part?” Rubin suggested.
“Didn’t bring a bass,” I said.
“I’ll run home and get you one,” said one of the guys who had been watching the sessions. He and his friends turned out to the the Beastie Boys, another group that Rick was producing, who happened to be hanging out during the session.

There are many kinds of brothers, from Cain and Abel, to the Marx Brothers, to Orville and Wilbur Wright. There’s good and bad blood among brothers, love and jealousy, compassion and resentment, and every other emotion in between. I have no doubt that, in a deep and abiding way, Steven Tyler is my brother. Together we have forged and maintained a great band, together we have changed each other’s lives. Our stories are intertwined. For that I’m grateful.

Taking stock at the end of the twentieth century, we had much to be grateful for. We had survived every kind of personal and professional strom imageable. Our hope was that it would be smooth sailing ahead. We were entering a new millennium with renewed hope. I would love to tell you that, for the next decade, harmony was the theme. But the truth is that the Aerosmith way of life would never change.

Have the struggles been worth it? The music has made it all worth it. And I know there’s still music to come. As long as there is breath inside me, I will make music. Music is the ongoing miracle that gives my life meaning. Music inspired me as a child; music changed me, directed me, and set me on the path that has led me to this moment.

When I decided to write this book, I had no idea what it would take out of me. Yeah, it was cathartic, and I learned a lot more about myself, human nature, and life in general, but mostly I got a chance to get down on paper, as close as I could, what turned out to be an adventure I absolutely had no idea was in store for me.