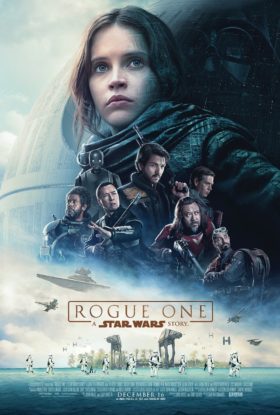 Rogue One: A Star Wars Story

Tagline(s): A rebellion built on hope.
Save the Rebellion. Save the dream.

Synopsis: The daughter of an Imperial scientist joins the Rebel Alliance in a risky move to steal the Death Star plans.

Declassified by Agent Palmer: An Honest Review of Rogue One: A Star Wars Story

Chirrut Îmwe: I’m one with the Force, and the Force is with me.

Darth Vader: Be careful not to choke on your aspirations, Director.

K-2SO: There you are. I’m standing by as you requested, although there’s a problem on the horizon. There’s no horizon.

Jyn Erso: What chance do we have? The question is “what choice.” Run, hide, plead for mercy, scatter your forces. You give way to an enemy this evil with this much power and you condemn the galaxy to an eternity of submission. The time to fight is now!

K-2SO: There were a lot of explosions for two people blending in.

Jyn Erso: We have hope. Rebellions are built on hope!

K-2SO: Congratulations. You are being rescued. Please do not resist.

Jyn Erso: If we can make it to the ground, we’ll take the next chance. And the next. On and on until we win… or the chances are spent.

Chirrut Îmwe: The strongest stars have hearts of kyber.

Saw Gerrera: You can stand to see the Imperial flag reign across the galaxy?
Jyn Erso: It’s not a problem if you don’t look up.

Chirrut Îmwe: And I fear nothing. For all is as the Force wills it.

Grand Moff Tarkin: Failure will find you explaining why to a far less patient audience.

Whoever wants to reach a distant goal must take small steps.
Nothing in the world can take the place of persistence.
Sharing little joys offer great hope to others.
More Fortunes >