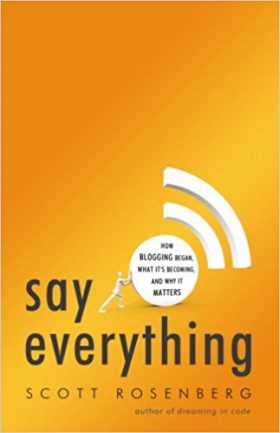 Tagline: How Blogging Began, What It’s Becoming, and Why It Matters

Declassified by Agent Palmer: “Say Everything” by Scott Rosenberg is a Must Read for All Bloggers

The web implicitly invited people to say anything–and everything.

Blogging, the first form of social media to be widely adopted beyond the world of technology enthusiasts, gave us a template for all other forms that would follow.

…Hall was full of the young Web’s utopian fervor–its “Prodigious Personal Publishing Potential,” as one of his pages put it…

If everyone was to tell their stories on the Web, we would have an endless human storybook, with alternating perspectives…

“The best content comes from people who love what they are doing,” Hall said.

Dishonesty to the left, selfishness to the right.

As long as there is a Web, it will offer youthful seekers a seductively grand public stage for playing out their quests for connection and identity and meaning. But why would anyone think it could stop them from growing up?

Any public career online is going to attract a certain volume of drive-by flak; potentially useful criticism is likely to be hopelessly tangled together with personal invective.

But the model of the weblog as a general miscellany–mixing the professional and the personal, the philosophical and the ephemeral–grew familiar before too long.

…”Solace: a text-book of romantic psychology,” which collects thousands of literary quotations on love and organizes them into a taxonomy of amatory wisdom. The goal of “Solace,” Barger wrote, was “a new paradigm for the social sciences, making possible computer simulations of human behavior.”

The efforts to identify a “first blog” are comical, and ultimately futile, because blogging was not invented; it evolved.

Filter the Web, not yourself.

“By writing a few lines each day,” she wrote, “weblog editors begin to redefine media as a public, participatory endeavor.”

A manager once told her, “You’ve got a lot of potential, but you need to learn to suffer fools better.”

I said out loud: There it is, that’s the moment we’re reversing now. It was a mistake to believe that creativity was something you could delegate, no matter how much better they were than you, because it’s an important human activity, like breathing, eating, walking, laughing, loving.

Most corporations . . . only know how to talk in the soothing, humorless monotone of the mission statement, marketing brochure, and your-call-is-important-to-us busy signal. Same old tone, same old lies . . . . But learning to speak in a human voice is not some trick, nor will corporations convince us they are human with lip service about “listening to customers.” They will only sound human when they empower real human beings to speak on their behalf.

In too many cases, the blogs that were supposed to be the “unofficial” story and the human face of the corporation had become just another faceless channel for soulless PR.

Cory Doctorow’s first science-fiction novel, Down and Out in the Magic Kingdom…

As Tom Coates, the pioneering British blogger behind plasticbag.org, wrote, “It was effectively the device that turned weblogs from an ease-of-publishing phenomenon into a conversational mess of overlapping communities.”

The shape of a blog, with its emphasis on “what’s new,” had always emphasized “now”; permalinks restored some weight to “then”–and each old post came clearly marked with its original date and time.

There is a knotty tale behind RSS, a saga filled with ancient grievances and grudges whose origins were never comprehensible to outsiders and are now largely forgotten even by insiders.

“Of course, I ended up alienating my family and losing my job and pissing off my friends, and it took WAY TOO LONG for me to figure out that while there is great power in personal publishing, there is also great danger. My supposed right to say anything I wanted got me into hot water in so many facets of my life that I finally realized it wasn’t worth it.”

–that the highest calling for a write online was to say everything, and say it as outrageously and flamboyantly and uninhibitedly as possible.

These elements are a necessary ingredient in keeping a cell alive, but the amount needed is a mere hard-to-measure trace. In larger doses these heavy metals are some of the most toxic substances known to life. They kill. Anonymity is the same.

…consider, for instance, Warnock’s Dilemma. The term describes the peculiar problem of interpreting the lack of response to an online posting. When nobody replies to you in a forum conversation, or with a comment on your post, it could mean that everyone agrees with you. Or it could mean that nobody cares enough about what you said to bother answering. Or maybe it means they think what you said was so stupid they can’t even begin to rip it apart. Or maybe there’s just nobody out there at all. The thing is, silence could mean any of these possibilities, or several of them at once. And you have absolutely no way to tell.

…Keller, apparently exasperated by Jarvis’s dogged, detailed replies, distilled his sense of frustration with the open-ended nature of the Journalists-versus-Bloggers dispute: “There seems to be no end to any argument in your world.”

Now that anyone could commit acts of journalism, who could claim protection under laws that privileged a special class of journalists?

In this controversy, as in most others today, to ignore bloggers is to miss the entire event. Whatever the drawbacks and limitations of blogging, it serves, today, as our culture’s indispensable public square. Rather than one tidy “unifying narrative,” it provides a noisy arena, open to everyone, for the collective working out of old conflicts and new ideas. As the profession of journalism tries to rescue itself from the wreckage of print and rethink its digital future, this is where its most knowledgeable practitioners and most creative students are doing their hardest thinking.

In surveying blogging, numbers matter, but only as a starting point. Blogs are, after all, notable for enabling the expression of individuality. If we view them only in the aggregate, we miss the most important details in the picture they collectively paint. You can tell me there are millions of blogs, and I can nod my head. But that isn’t the same as hearing about any tiny fraction of them in their unpredictable particularity.

Blogging is now globally ubiquitous. It is one of the central drivers of “the largest expansion in expressive capability in the history of the human race” (in Clay Shirky’s words.)

For the great mass of bloggers who would never have jotted down their thoughts in the first place if they didn’t have a blog, their posts represent the opposite of oblivion: they are a personal archive that can serve as a bulwark against forgetfulness.

Contemplative Man, the fellow who came to understand the world sentence by sentence, paragraph by paragraph is a goner. He’s being succeeded by Flickering Man, the fellow who darts from link to link, conjuring the world out of continually refreshed arrays of isolate pixels, shadows of shadows. The linearity of reason is blurring into the nonlinearity of impression; after five centuries of wakefulness, we’re lapsing into a dream state.

On the Web, publishing has become an abundant, effectively limitless resource. Clay Shirky has laid out the consequences for us: When publishing was scarce, we filtered first, making choices based on relevance or quality before committing words to our limited stock of paper, our costly fleet of trucks, our scarce radio and TV frequencies. The Web inverts this sequence. We publish, then filter. Say everything first, ask questions later.

Bloggers, most of them solo bootstrappers of their own stream of self-expression, are the most autonomous writers the world has yet seen–the least dependent on others to publish their words. (This is a central difference between the individualist blog and the collective wiki–the other Web-native writing form that achieved popular success this decade. On a blog, you alone can edit your words, on the typical wiki, anyone with an account can change anything.) At the same time, of all the species of writers, bloggers are the least insulated from their audience, most vulnerable to the ebb and flow of attention and response. They are both alone and in a crowd. Their solitude can inspire self-indulgent ranting; their sociability can tempt them into self-serving pandering. But every now and then they manage to hold their balance in this paradoxical position for an extended, exhilarating spell.

It is, as the journalism scholar Jay Rosen puts it, “a little First Amendment machine,” and engine of free speech operating powerfully at fulcrum-point between individual autonomy and the pressures of the group. Blogging uniquely straddles the acts of writing and reading; it can be private and public, solitary and gregarious, in ratios that each practitioner sets for himself. It is hardly the only way to project yourself onto the Web, and today it is no longer the easiest way. But it remains the most interesting way. Nothing else so richly combines the invitation to speak your mind with the opportunity to mix it up with other minds.

Working forward from a historical baseline of the Renaissance and a sort of “big bang” with the Gutenberg press, we find our species experiencing an expanding universe of information as a consistent condition of its existence.

For all the novelty surrounding it, the act of blogging is fundamentally literary. A blogger selects some information or experience, shapes it into words and sentences, and hoists it into public view.

Narratives–stories with beginnings, middles, and ends; stories in which something important changes; stories that “have a point”–are the format for our long-term memories.

“In a world of hyperabundant content, point of view will become the scarcest of resources.”

A difference, to be a difference, must make a difference.
Things are turning for the bright side.
Today it’s okay to make a few choices by going with your instincts.
More Fortunes >