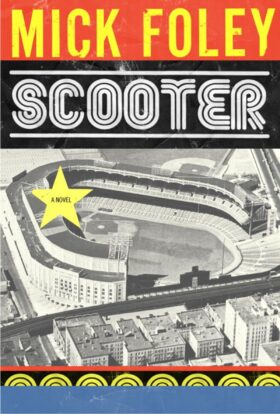 Synopsis: Scooter Riley is a regular kid growing up in the Bronx, on Shakespeare Avenue, just north of Yankee Stadium. His father, Patrick Riley, is a New York City cop; his beat is Harlem, streets that are getting rougher by the day in the wake of the assassinations of Dr. King and Bobby Kennedy. Riley’s Spartan code of ethics and unwavering sense of duty to his neighborhood and the Force will carry him through; neither homicide nor drugs are going to get in his way, even if his wife does want them to get the hell out of the Bronx and for him to take a “safe” job somewhere in the suburbs. He’s happy with things as they are and wants to make time stand still, going to Yankee games in the neighborhood as he did growing up (as a boy he’d waited for hours to meet Joe D.—the great Yankee Clipper—and collected two decades of Yankee autographs of Yogi, Larson, Lopat, Mantle, too; on yearbooks, scorecards, ticket stubs, Spaldeens). Riley wants his son, Scooter—named after Yankee shortstop Phil Rizzuto, MVP, 1950—to have a childhood just like his own.

Scooter doesn’t get the same thrill his father gets from going to Yankee Stadium and watching the players “punch it through the hole,” or “spray it all around.” He loves his father but yearns for his own style—in baseball and in life.

His grandfather, a fireman for thirty years and horribly scarred, harbors a dark secret that has caused a deep rift between him and Scooter’s dad. Scooter’s grandfather sees the game of baseball as the game of life itself—to him all of life’s great lessons are explained in baseball lore, and he teaches Scooter to play the game in a way that’s different from how his father wants him to play. He teaches Scooter as well that life can be defined in a few extraordinary moments—moments of courage, of cowardice—when the ability to act, or not, defines who you are, and who you will become.

Into this world, a world that becomes increasingly less kind to Scooter, the defining moments his grandfather has warned him about come at a rapid pace, and as the years pass and Scooter grows up, it is through baseball, and its timeless rhythms, that the defining moments in Scooter’s life are played out—and that the boy he is now, and the young man he will become, are shaped.

Declassified by Agent Palmer: Mick Foley brings the heat with Scooter: A Novel

…I think more than the outcome, the game’s timeless rhythm put him at peace.

My grandfather saw the game of baseball as if it were the game of life itself, as if all of life’s great lessons could be explained in baseball lore.

I never saw him again. But the lesson I learned has never been lost. Fight strength with strength. Never fear losing, only fear losing faith. And most of all—always swing from the heels.

“But history doesn’t recognize events that it finds dull. One’s own epitaph is written by moments that circumstance defines. Moments of achievement–and ones we wish we could have back…”

“Because the Mets aren’t our team. Hey, I know what you’re thinkin’. We had fun that night. Isn’t that right?” I nodded my head. “But just ‘cause it’s fun does not make it right. Listen, as you grow up, you’ll see lots of things that look fun. You’ll see other people do them–you’ll want to too.”
“Dad, isn’t this the same talk we had about drugs?”
“That’s right,” said my dad, clapping his hands, as if he’d just made his point. Though his point seemed kind of pointless.
“Because the Mets are like drugs. They’re both bad addictions. Hey, I can see why a young kid could get hooked on the Mets. They’re handsome, they’re young, they’re kind of successful.”

“I’m talking about loyalty. The fact that you stick with the one that you love. Even when things aren’t perfect. You love your team, for better or worse…”

I rarely watched the ball games with my father anymore. They brought back thoughts of simpler times, and the memories made me sad. Instead, I learned to hid between the covers of my books. Stories could transport me to places far away. Places where loving dads didn’t shoot their kids. Places where the hero sometimes got the girl.

“I’ll tell you just this. When you find that one love, you hold on to it tight. Don’t let it go. Help it, protect it, keep it from harm–but Scooter, I warn you, you might get only one chance. Don’t let it go.”

Perhaps I really did believe that any action trumped inaction.

The first cut is the deepest. Some teams had just one round of those brutal, life-defining moments. Other sports, like baseball, had a few. For some players it was easy; they were as good as on the team. On the basis of their merit on teams in years past or because they kissed the coach’s ass.
For other kids, the total scrubs, it was relatively painless. They knew their chances going in and had accepted life in nerdland. At least these kids had backup plans like college and careers. It was for those poor souls caught in between that cuts could be so damaging. For those were the ones who put their faith in sport and saw their faith squashed like roadkill squirrels, based on a few swings of the bad.

Kool-Aid seemed so innocent before Jonestown.

That “eye for an eye” stuff always seemed at odds with the “turn the other cheek” stuff later in the same book.

Some guys I knew were bi-musical. Twisted Sister on a Friday night, a mirrored hanging ball and lit-up dance floor on a Saturday.

I hoped that Grandpa’s story about transcending what was believed to be possible had some truth to it. Could it be? And if so, could one man, through constant visualization, pickl the time to make it happen? If that one man applied everything, could he create his own destiny?

You are interested in higher education, whether material or spiritual.
A difference, to be a difference, must make a difference.
Things are turning for the bright side.
More Fortunes >