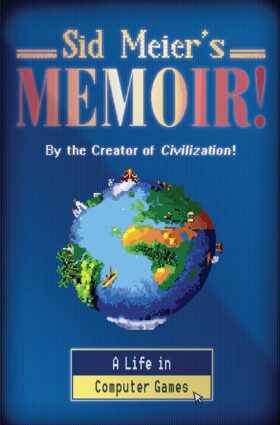 Tagline: A Life in Computer Games

To the worldwide community of computer, console, and mobile gamers (and their long-suffering spouses, parents, and significant others).

I’d even want to acknowledge projects that started strong but fizzled early, because sometimes it takes a misstep to figure out where you should be headed.

…there is one thing every game in this book has in common. They are fundamentally comprised, as all games are, of a series of interesting decisions.

At the time it felt like a fun project, but not any sort of life-changing decision. The big moments rarely do, I think, and the danger of retroactive mythologizing is that it makes people want to hold out for something dramatic, rather than throwing themselves into every opportunity.

Changing the angle of a line may not seem like much in today’s terms, but it’s a lot harder when you’re doing it on a computer whose entire memory could hold roughly three chapters of this book in plain text format.

I was still immersed in hacker culture at the time–which back then looked like a guy in a tucked-in polo shirt deciding between two circuit boards, not a shadowy figure crouched over a laptop in a secret hideout whispering “I’m in”

“Sid’ll figure it out,” he always said. Whether he meant I’d find new inspiration, or come to my senses, I wasn’t sure. (He = Bill Stealey)

I’ve always felt that our role as game designers is to suspend reality, not examine the pain of real moral dilemmas.

Sometimes I think we’d be better off going back to a time when communication took at least a minimal amount of investment.

Age and experience may bring wisdom, but sometimes it’s useful to be a young person who hasn’t learned how to doubt himself yet.

As Chris Crawford once wrote, “The time has come for us to outgrow Hollywood envy. . . . Sid Meier makes a pathetic Arnold Schwarzenegger, but he makes a magnificent Sid Meier.”

Our job is to impress you with yourself, and on that, we have a monopoly.

I struggled to find a path forward, and quietly worried about how long a state of burnout could persist before it became permanent.

I’m an introvert who likes people: I want to collaborate on the whole, but do my part individually.

In the right context, a game is not just a vehicle for fun, but an exercise in self-determination and confidence. Good games teach us that there are tradeoffs to everything, actions lead to outcomes, and the chance to try again is almost always out there.

Dani [Bunten Berry] understood that game design is an evolutionary process that we take part in together, and the growth of the industry is something we all benefit from.

The difference between creativity and theft is that creativity adds, and each addition creates potential that wasn’t there before. If we don’t share our ideas and help one another build, we’ll never get tall enough to find out what’s next.

When escapism is done right, it creates a community of escapees that never existed before. The only alternative would be to knowingly create something less powerful, to deliberately dial back that human connection out of fear. That’s madness. We’re stronger together, and the more universal and effective our games are, the more knowledge, empathy, and ambition we can inspire.

…one of the secrets of being a game designer is that you can get to reuse your stuff–writers can’t plagiarize their own passages; artists can’t add details to a portrait and call it new; but I can rearrange existing pieces of code into a completely different game within just a few hours.

Ideas are cheap; execution is valuable.

I’ve always preferred the word “learning,” myself. Education is somebody else telling you what to think, while learning is opening yourself to new possibilities, and grasping a concept because you understand it on a personal level.

You can’t decide what something’s going to be before you embark on it, and you shouldn’t stick with a bad idea just because you’re fond of it. Take action as quickly and repeatedly as possible, take advantage of what you already know, and take liberties with tradition. But most importantly, take the time to appreciate the possibilities, and make sure all of your decisions are interesting ones.

Achievement Unlocked:
A Journey of 1,000 Miles—Read one page.
Books Don’t Come with a Demo Mode—Time to buy this thing.
We Didn’t Start the Fire—Collect Billy Joel, the Ayatollah, and Kennedy.
My Country ‘Tis of—Read the word “the” 1,000 times.
Sgt. Pepper’s Lonely Hearts Club Band—Gather four moustaches.
Prosthetic Devices—Collect Blackbear, a peg leg, Van Gogh, and an ear.
Life Is Short—Finish a chapter in less than one page.
Midlife Crisis—Whoa, we’re halfway there.
Watson’s Pals—Discuss Deep Blue and Sherlock Holmes.
Too Long for a Tweet—Read 240,000 characters.
Dystopian Dinner Party—Hang out with Orson Scott Card, Aldous Huxley, Robert Heinlein, and George Orwell.
Be Excellent to Each Other—Encounter Beethoven, Lincoln, Napoleon, and Genghis Khan.
To Infinity and Beyond—Collect a piggy bank, toy soldiers, T. rex, and Mr. Potato Head.
This Belongs in a Museum—Go on a raid with Indiana Jones, George Lucas, John Williams, and Steven Spielberg.
Expected Territory—Read the word “civilization” 125 times.
Share the Credit—Identify thirty-six other developers by name.
Everybody but the Biker—Visit the YMCA with a soldier, a railroad worker, a police captain, Pocatello, and Blazing Saddles.
Completionist!—Read the Special Thanks section.

Look forward to great fortune and a new lease on life!
Even the greatest of whales is helpless in the middle of a desert.
Fame and fortune are coming your way.
More Fortunes >