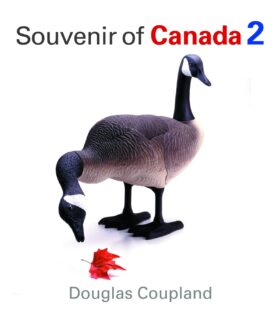 Synopsis: Douglas Coupland gets Canada, and he has set out to re-invent his country with his particular brand of insight, humour and visual acuity.

Canada continues to feel more Canadian than ever.
There’s almost nothing more fun than finding a twenty-dollar bill in an old coat pocket –something wonderful you never even knew you had, and then suddenly, out of the blue, it’s yours.
Creating this book was like finding twenty-dollar bills all over the place. I had no idea how Canadian I was, but suddenly, wham! It was right there all along, just waiting to be found. I hope you, the reader, enjoy that same sense of cheerful discovery with every page. Yes, the world may be getting smaller, but Canada is also getting more Canada-er. That’s a very good thing.
Please, remove your toque, put your long johns in the dryer, grab a doughnut and sit down for a trip across the country. Enjoy what’s yours.

Everyone thinks Canada’s this vast country, but when it comes to people, no way is it huge. These days, when I’m in Europe and people ask, “Do you know So-and-so?” more often than not, I do. I’ve just come to expect this.

A hoser is a beer-drinking, eh-saying gallunk who lives in his parents’ basement and watches cable TV while wearing a combination of hockey garb, hunting gear and army surplus accessories.

…a widespread tendency of Canadians to be Anglophiles, a tendency both endearing and crippling.

When thinking of Canadian history, you can never underestimate the power of the railway. If it hadn’t been built, the U.S. would be about fifty-eight to sixty states right now instead of fifty. The railway made Canada, Canada.

The moose, possibly more than the beaver, is an animal whose gait and size and personality lives within the quiet nooks of the national imagination, chewing away at a blueberry bush while small birds tickle its antlers.

The U.S. has a melting pot culture. Canada’s isn’t quite a melting pot, but no one’s really sure what it is … a quilt? … a salad? … a sandwich? … a soup? … a piñata? … a mosaic? What we know for sure is that what was once alien becomes Canadian in the end, and that in the future our country may well quite cheerfully resemble the outer-space cocktail-lounge scenes from Star Wars.

Canada’s one true national art form is the indignant letter to the editor. Canadians love being shocked and appalled in print and take great care that their indignation is cutting yet subtle, with a hint of passive aggression.

Canada is not an imperialist nation. We’re not out for more land. We can only ever have what we have now. This keeps us humble and forever on guard.

Canadians also know darn well that, more often than not, our existence suits the Americans. We’re indeed their back door, their underground railroad, their matrix–or whatever metaphor you choose. In some ways, if the war of 1812 had gone differently and North America was one big United States, the Americans would have had to invent Canada as a diplomatic construct, precisely for all the alternative strategies and options our presence affords them.

In fact, pulling up stakes is pretty much the norm for most Canadians, moving up, moving west, moving east, but always moving.

It is a truth: Canadians are blessed. We have yet to become whatever it is we’re going to be. We still own our future. Our landscape is bold and fertile and inspires us with its power and its extremes. Whatever may be happening in the world, the future we build remains bright for us here. What a legacy to inherit, and what did we ever do to deserve this? I’ve thought about this question, and I don’t think it’s a matter of what we did to deserve Canada. It’s more a matter of asking, what must we do to continue deserving it. Our Country isn’t a prize–it’s something we earn every day. Canada isn’t something we can take for granted, we have to work at earning it. Forget politicians. Forget much of the claptrap we’ve been taught. Remember that the moment we stop valuing what we have is the moment we will lose it. The land is our blessing and our duty.

Look forward to great fortune and a new lease on life!
Today it’s okay to make a few choices by going with your instincts.
Courtesy is the password to safety.
More Fortunes >