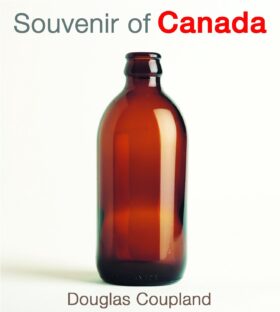 Synopsis: Douglas Coupland offers new ways of seeing and experiencing Canada-looking at how it feels to be a Canadian right now and speculating what it might feel like in the future. From collective memories, he locates objects like stubbie beer bottles and ookpiks, Kraft dinner and maple walnut ice cream. And with the same unique sensibility, he considers significant events and relevant issues, like Canada’s relationship with the United States, medicare, and the landscape itself.

Declassified by Agent Palmer: Souvenir of Canada is not to be left untouched on a shelf

To accomplish this insider-only goal, I used the nearly extinct visual mode of the still life. I wanted the formal beauty of the still life to draw in the viewer, and then confront him or her with icons and forms which draw on our nation’s shared memories, both humble and noble.

…our reservoir of myths is far smaller and far more fragile than those of some other nations. Once the supplies dry up, they dry up. What happens then is that you start recycling myths, which turn into cliches; and before you know it, history has turned into nothing more than clip art.

…you just have to accept the fact that Canada is, in some obtusely Star Trek manner, a parallel-universe country, with two variations existing alongside each other; and through the miracle of nationhood, we bounce back and forth between the two universes.

You can never overstate how large a country Canada is. Everything is far away from everything. And a sizable chunk of the Canadian identity is defined both by how we pretend this isn’t the case, and how we can be so shockingly cavalier about plane hops like Vancouver to Winnipeg or Montreal to Halifax.

Canada has to crank out enough Canada-osity to justify our existence as a full-blown country. It’s work.

Canada’s fourth-largest city is Los Angeles. More Canadians live there than in Ottawa or Calgary or Edmonton or Winnipeg or Quebec City.

Canada has managed to reach a form of social Valhalla. Good for us. But the moment we rest on our laurels is the moment it all turns to crap. Instantly. Eternal vigilance is indeed the price of liberty.

Oh, and if you take a black Sharpie pen to the portrait of Wilfred LAurier on the five-dollar bill, he looks just like Spock from Star Trek.

…it’s rare to have geological time and human time overlap so neatly.

Canada has no national foods which are, to have them described, frightening –for example, the Scots have haggis, and the Arabs have sheep’s eyeball soup. But Canada does have poutine: french fries covered with melted cheese curds, which are then glazed with gravy. Poutine doesn’t have the immediate fear factor of haggis, but you do have to steel yourself for the first few bites. Having said this, poutine’s rich content of starch, sugar, oil, fat and salt are ideal for larding it up for a dark Quebec winter. Western Canada, which was once thought to be poutine-proof, is now coming to embrace the dish. Next stop: the world.

Canada’s official history was all written and codified by 1976, with the end of the Olympics in Montreal. Everything that came after then is just loose ends and paperwork: having the constitution transferred from Britain to Canada, renaming and redefining some internal boundaries, clearing out the nation’s IN-basket. And so it’s very odd indeed to be living in a country where the official version of our history–short as it is–is already “over.”

…to much of the world, Canada embodies the way the United States was supposed to have turned out.

It’s our Big Road. It’s our spinal cord. It’s our escape hatch. It’s the ace up our sleeve. It’s a lot of metpahors embodied in one thing.

Most Canadians have done this trip or one similar to it, and most have a first-hand experience of the capacity of long journeys to corrode relationships.

In Canada, when we speak of water, we’re speaking of ourselves. Canadians are known to be extravagant, and one explanation of this might be that we know that wasted water means a diminished collective soul; polluted waters mean a sickened soul. Water is the basis of our self-identity, and when we dream of canoes and thunderstorms and streams and even snowballs, we’re dreaming about our innermost selves.

*Part of this paragraph was cribbed from City of Glass, a book about Vancouver that I wrote in 2000.

Courtesy is the password to safety.
You are interested in higher education, whether material or spiritual.
Let’s finish this up now, someone is waiting for you on that.
More Fortunes >