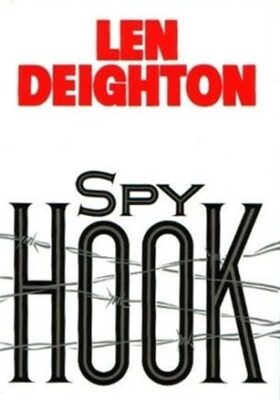 Synopsis: Samson uncovers a far-ranging financial scam within the British Secret Service and travels through Europe and America to halt the operation, but charges of treason and threats to his life may stop him.

Declassified by Agent Palmer: Second Samson trilogy gets its ‘Hook’ in quickly

“Revenge never is logical. Wise up. They’ll get you, one way or the other. Even resigning from the Department–the way I did–makes them mad. They see it as a betrayal. They expect everyone to stay in harness forever.”

We’d been proved right, and in the eyes of the mandarins of the Foreign Office that was a rare and unpardonable sin.

…marriage didn’t fit well with men “in our line of business; women don’t like secrets to which they are not a party.”

“That lousy school in Berlin,” he said.” “I never understood why your father let you go to a little local school like that. There were schools for the sons of British officers, weren’t there?”
“He said it would be good for my German.”
“And it was,” conceded Dicky. “But you must have been the only English child there. It made you into a loner, Bernard.”
“I suppose it did.”
“And you’re proud of that, I know. But a loner is a misfit, Bernard. I wish I could make you see that.”

No surprise now. Up came that damned bogus number that couldn’t possibly have come from the normal filing system; REFER FILE FO FX MI 123/456. And, of course, the subsequent keying was answered by the inevitable request for the ARCTIC NUMBER. So whatever the Arctic number was, it would give an inquirer answers about Jim Prettyman, his U.S. employers–almost certainly a front for some sort of illicit business–and whatever my wife, Fiona, was doing during those final weeks before her defection.

Was that because he was a Jew? Did he feel he had to conceal his true feelings from a hostile world?

Most people were hurtled through life on a financial switchback, a roller coaster that decided for them whether they must economize or splurge. Not Werner; Werner always had enough. He decided what he wanted–anything, whether it was a little place round the corner that did a good salmon mousse, or a splendid new car–and put his hand in his pocket and bought it. Mind you, Werner’s needs were modest; he didn’t hanker for yachts or private planes, keep mistresses, gamble, or throw lots of extravagant parties. Werner simply had money more than sufficient for his needs. I envied his unbudgeted easygoing life style; he made me feel like a money-grubbing wage salve, because, I supposed, that’s exactly what I am.

“Sometimes an onlooker sees the game more clearly than the players.” – Bret R.

And I have always been opposed to violence, even when it’s in a manner of speaking.

After no more than a glance at the menu, Gloria said, “Could I have that delicious calves’-liver dish you do with the onions and sage? And start with the marinated mushrooms?” She was like that: she could make up her mind very quickly about almost everything. I often wondered whether she had her answers prepared in advance. Or was it that she simply didn’t care very much about the consequences of these things she was so quick to decide upon.

“Just keep it warm until we hear who’s going to be on the committee,” Dicky would say. Or “Tell the old bastard to get stuffed, but keep him sweet,” “This might work out if they find the right people, but make sure it doesn’t bounce back our way,” and his standard reaction, “Find out what they really expect and maybe we’ll be able to meet them halfway.” These were the sort of arcane instructions I was trying to implement on Tuesday while Dicky was gone to wherever he went when there was work in the offing. And Dickey wanted everything done by the end of the day.

I sipped a lovely Château Palmer and nodded. The wine was coming to life now, a wonderful combination of half-forgotten fragrancies.

“Just because everyone says there is nothing wrong, we shouldn’t refuse to examine it more closely. Strange things happen in the place where I go to work. I’m not talking about the Ministry of Education or the Department of Health and Social Services, Cindy. I’m talking about the palace where the rough stuff is arranged.”

“I think you want to destroy yourself. It’s something to do with Fiona leaving you. Perhaps you feel guilty in some way. But all these theories you dream up . . . I mean, they never come to anything, do they? Don’t you see that inside you there is some kind of worm that is eating you up? I supposed you desperately want to believe that all the world is wrong, and only Bernard Samson is right.” She snapped her handbag lock closed. “Forget all this crap, Bernard. Life is too short to rectify all the world’s wrongs. It took me a long time to see that, but from now on I live my life. I’m not going to change the world.”

…people who are in love are good company only for their beloved.

Sometimes I wondered what kind of man my father must have been to have made a friendship so deep and binding that I was still drawing upon its capital.

The path of life shall lead upwards for you.
Nothing in the world can take the place of persistence.
Sharing little joys offer great hope to others.
More Fortunes >