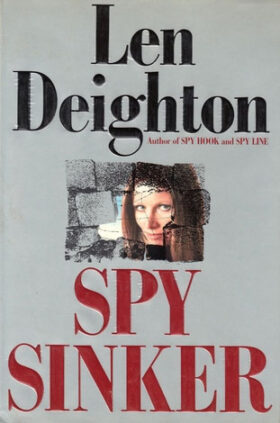 Synopsis: Spy Sinker is the culmination of the six previous novels, but it’s so much more than that. In a way, Berlin Game, Mexico Set, London Match, Winter, Spy Hook, and Spy Line are the dots plotted on a graph in the Bernard Samson Universe that Len Deighton has crafted, and Spy Sinker connects them all.

He had often accused her of being a dreamer, which by extension was his claim to be a practical realist.

A lot of sleepers assigned to deep cover just took the money and relied on the good chance that they’d never be asked to do anything at all.

The D-G had seen that determination before in rich men’s sons, overcompensation or guilt or something. They never knew where to stop.

“Brave, perhaps. Determined, undoubtedly. But not even his most foolish friends could possibly call him clever, Fiona.”

“Bernard likes people to take him for a fool. It’s the way he leads them on. If Bernard ever suspected . . . I’d be done for. He’d take me to pieces.” She paused. “And the Centre would ask why.”

Fiona Samson, a thirty-one-year-old careerist, was a woman of many secrets and always had been.

Fiona’s husband was the only person she’d ever met who completely disregarded other people’s evaluation of him.

“You say it’s improbable. Okay, you’re the boss. But do my job for a little while, and maybe you’d start thinking you can’t use that word improbable, because when boys and girls get together, nothing, is improbable.” – Sylvester Bernstein

“You’re a cold-blooded bastard,” she told him.
“It never was a job suited to hot-blooded people,” said Bret.

Every now and again, the British establishment decorously embraces a rogue, if not to say a rogue elephant, a man who breaks every rule and delights in doing so, one who recognizes no master and few equals.

But if, as Chandler said, “Down these mean streets a man must go who is not himself mean, who is neither tarnished nor afraid. . . . Complete man, common man, and yet an unusual man,” Bernard Samson was such a man. The day she first saw him she knew it would be unendurable to lose him to another.

“Bernard’s arrogance comes from something inside him, some vitality, force, and a seemingly inexhaustible fund of courage. Our great universities will never be able to furnish inner strength, no one can. What teachers provide is always superimposed on the person that already exists. Education is a carapace, a cloud laid on the soul, a protection, a coloration or something to hide inside.” – Silas to Bret

“I don’t think so, Sir Henry. Samson is a civilized man.” Bret went across the office and held the door open for him.
“Is he?” said the D-G in that cheery way he could summon so readily. “Then he hasn’t been properly trained.”

“I cannot answer on your behalf, but for me and many of my colleagues I suspect that dealing in failure provides an excuse for a lack of success. And like you, perhaps, I enjoy the challenge of such fragile, complicated, and deceptive disciplines. Can you ever be sure that you are right?” He paused. “Right about anything at all?”

“You’re so young. You trust everyone and the world is so cruel.” Gloria’s mom to Gloria

Bernard Samson could be an amusing companion when he was in a good mood. His caustic comments on his superiors, the government, and indeed the world around him were partly his defense against a system that had never given him a proper chance, but they sometimes contained more than a grain of truth. Bernard’s reputation was of being lucky, but his luck came from a professional attitude and a lot of hard work. Bernard was a tough guy, and there can be no doubt that Bret’s willingness to involve himself in this caper was largely owing to the fact that he felt safe with Bernard.

Depression, she’d found, was no respecter of logical truth; it was some dark chemical cloud that descended on her at random and reduced her to jelly. – Fiona

There was always another layer of onion no matter how deep you went.

Even a broken clock is right two times a day.
The path of life shall lead upwards for you.
You are interested in higher education, whether material or spiritual.
More Fortunes >