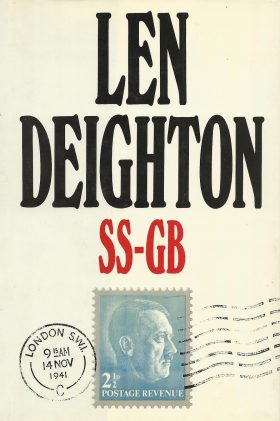 Synopsis: In February 1941 British Command surrendered to the Nazis. Churchill has been executed, the King is in the Tower and the SS are in Whitehall… For nine months Britain has been occupied – a blitzed, depressed and dingy country. However, it’s `business as usual’ at Scotland Yard run by the SS when Detective Inspector Archer is assigned to a routine murder case. Life must go on. But when SS Standartenfuhrer Huth arrives from Berlin with orders from the great Himmler himself to supervise the investigation, the resourceful Archer finds himself caught up in a high level, all action, espionage battle. This is a spy story quite different from any other. Only Deighton, with his flair for historical research and his narrative genius, could have written it.

Declassified by Agent Palmer: Getting Caught in the Cross-Fire of SS-GB by Len Deighton: A Spoiler Free Review

‘You spend too much time listening to what people say’

Harry Woods was a policeman of the old school, scornful of paperwork, filing systems and microscopes.

A man can get used to yellow fever, thought Douglas, but many of them die in the attempt.

‘Any breach of this instruction,’ said Huth, ‘is not only a capital offence under section 134 of the Military Orders of the Commander-in-Chief Great Britain, for which the penalty is a firing squad, but also a capital offence under section II of our own Emergency Powers (German Occupation) Act 1941, for which they hang offenders at Wandsworth Prison.’
‘Would the shooting or the handing come first?’ said Douglas.
‘We must always leave something for the jury to decide,’ said Huth.

Douglas reeled out of Kellerman’s office, light-headed from the loss of sleep, sweet cigar smoke and the rich diet of flattery.

Douglas Archer had a reputation for being sarcastic.

Barbara Barga was a very attractive woman. That night, her soft young body, quick mind and easy smile awakened in Douglas Archer thoughts that might have been better dormant.

‘Anyone who thinks there’s anywhere in this town he can relax without a policeman listening to him, is a fool,’ said Bernard in the same soft diffident voice that had betrayed so many into contradicting him, both in college and board room.

It had always been like this when he was young; the girls he wanted most were the ones he offended and with whom he made a fool of himself.

Douglas followed her. ‘That’s the trouble with wars,’ he said.
‘You can say that again. I was in Catalonia and in Madrid. That’s the way it goes, believe me. Blackshirts, redshirts, brownshirts; the same lousy crooks are trying to take over the world. I’ve seen those same sort of greedy-eyed politicians from Chaco to Addis Ababa.’

‘Pity. Best pastime a police officer can have, in my opinion. Fishing teaches a man patience; and teaches him a lot about men.’

‘Thomas Aquinas argued that suicide is a sin because it is an offence against society. By taking one’s own life a man deprives society of something that rightfully belongs to it.’

General Kellerman gives orders to the famous Archer of the Yard, Britain’s young master detective, who has been described as “the Sherlock Holmes of the nineteen-forties.”

‘The explosion — that’s right! Dig up old Karl, after half a century in the phosphate-rich soil of north-west London, and don’t be surprised if he farts in your eye — right?’

Perhaps hell is like that; a discordant confusion of anxious souls.

All of his working life had been spent in this sort of squalor. But until now he’d been fortified by the belief that he was upholding law and order. Now as he looked across the road that belief faltered.

And yet, after all the reasoning was done, he’d fallen in love with her. There was no denying it; he wanted her in every way. But as a policeman, he distrusted love; too often had he seen the other side of it, the violence, the suffering and despair it could bring.

She saw then the great strength within him, not the athletic superiority that men so often used to intimidate others, but a strength that was kind and unassuming.

Kellerman made peace with his new masters, for he was a man supple enough to bend to the winds of change.

Or was the truth — like so many truths — not any one of the envisaged possibilities?

There was always enough money and labour for hatred.

‘I’ve spent all my life being hunted and persecuted. I’m giving you good advice, my friend, when I tell you to slow your pace, life for each day and learn to enjoy the small pleasures of life … ’ he waved vaguely in the air, ‘ … beautiful women, good clarets and fine food. We can’t beat the Germans by next weekend, George, it’s going to be a long, uphill struggle. Pace yourself, and take the long view.’

‘Goes to show,’ said the barman. ‘You can rehearse and rehearse, but there’s always the chance that it will go wrong.’

Douglas wondered that men could be so brave or so foolhardy.

Yes, now Douglas began to understand the way that a politician’s mind worked.

‘Why do these people love you, Archer? Is it simply because you show little or no response to their affection?’

‘None of us is very clever with the ones we love,’ said Huth.

Let’s finish this up now, someone is waiting for you on that.
Courtesy is the password to safety.
The path of life shall lead upwards for you.
More Fortunes >