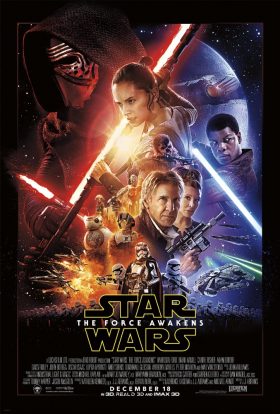 Tagline(s): Every generation has a story.
Coming to your galaxy this winter.
The force is calling to you. Just let it in.
A long time ago in a galaxy far, far away…

Synopsis: Three decades after the defeat of the Galactic Empire, a new threat arises. The First Order attempts to rule the galaxy and only a ragtag group of heroes can stop them, along with the help of the Resistance.

Declassified by Agent Palmer: Star Wars is back! A Spoiler-Free Review of Star Wars: The Force Awakens

The Crawl: Luke Skywalker has vanished. In his absence, the sinister FIRST ORDER has risen from the ashes of the Empire and will not rest until Skywalker, the last Jedi, has been destroyed. With the support of the REPUBLIC, General Leia Organa leads a brave RESISTANCE. She is desperate to find her brother Luke and gain his help in restoring peace and justice to the galaxy. Leia has sent her most daring pilot on a secret mission to Jakku, where an old ally has discovered a clue to Luke’s whereabouts…

Rey: This is the ship that made the Kessel Run in fourteen parsecs?
Han Solo: Twelve!

Finn: What should we do with her?
Han Solo: Is there a garbage chute… or trash compactor?

Han Solo: I used to wonder about that myself. Thought it was a bunch of mumbo-jumbo. A magical power holding together good and evil, the dark side and the light. Crazy thing is… it’s true. The Force. The Jedi… All of it… It’s all true.

Han Solo: Listen, Big Deal. You got another problem. Women always figure out the truth. Always.

Rey: You. You’re afraid. That you will never be as strong as Darth Vader.

Han Solo: Okay. How do we blow it up? There’s always a way to do that.

Leia: You know, no matter how much we fought… I’ve always hated watching you leave.
Han Solo: That’s why I did it. So you’d miss me.
Leia: I did miss you.

Rey: What are you gonna do?
Han Solo: Same thing I always do. Talk my way out of it.

Finn: I’m not Resistance. I’m not a hero. I’m a stormtrooper. Like all of them, I was taken from a family I’ll never know. And raised to do one thing. But my first battle, I made a choice. I wasn’t gonna kill for them. So I ran. Right into you. And you looked at me like no one ever had. I was ashamed of what I was. But I’m done with the First Order. I’m never going back. Rey, come with me.

Han Solo: I’m trying to be helpful.
Leia: When did that ever help? And don’t say the Death Star.

Kylo Ren: You’re so lonely… So afraid to leave… At night, desperate to sleep… You imagine an ocean… I see it… I see the island… And Han Solo… You feel like he’s the father you never had. He would have disappointed you.

Maz Kanata: The belonging you seek is not behind you… it is ahead. I am no Jedi, but I know the Force. It moves through and surrounds every living thing. Close your eyes… Feel it… The light… it’s always been there. It will guide you. The saber. Take it.

Han Solo: Watch the thrust. We’re going out of here at lightspeed.
Rey: From inside the hangar? Is that even possible?
Han Solo: I never ask that question ’till after I’ve done it.

General Hux: Today is the end of the Republic. The end of a regime that acquiesces to disorder. At this very moment in a system far from here, the New Republic lies to the galaxy while secretly supporting the treachery of the rogues of the Resistance. This fierce machine which you have built, upon which we stand will bring an end to the Senate, to their cherished fleet. All remaining systems will bow to the First Order and will remember this as the last day of the Republic!

Courtesy is the password to safety.
Whoever wants to reach a distant goal must take small steps.
Things are turning for the bright side.
More Fortunes >