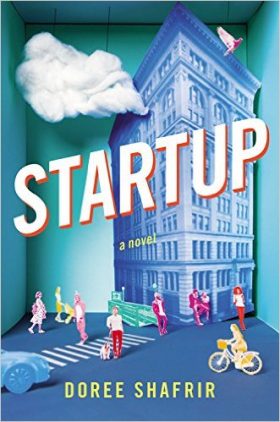 Synopsis: When Mack’s bad behavior collides with Katya’s search for a salacious post, Sabrina gets caught in the middle as TakeOff goes viral for all the wrong reasons. As the fallout from Mack’s scandal engulfs the lower Manhattan office building where all three work, it’s up to Katya and Sabrina to write the story the men in their lives would prefer remain untold.

…a new generation of twentysomethings, the data scientists and brand strategists and software engineers and social media managers and product leads and marketing associates and IT coordinators ready to disrupt the world with apps.

But VC firms were built to understand and profit from this new world.

“I love Twitter but, man, it really has ruined journalism.” This was a familiar rant of Dan’s, right up there with how young reporters today didn’t know how to pick up a phone and instead got all their information online, how pointless journalism school was, and how many resumes he got each week from people his age who had finally figured out that print was dead and they should jump on this newfangled internet train.

If it wasn’t on your phone, it might as well not exist.

But TakeOff seemed devoted to spending a significant amount of its latest round of funding on making sure its employees never, ever went hungry, as though the key to happy employees were bottomless bags of Baked Lay’s.

And people who said that they watched shows ironically or as “guilty pleasures” she understood even less. Life was short. Why waste it on something that made you feel like you had to explain yourself?

She remembered that she used to think that if she wasn’t exactly destined for greatness, she would definitely at least be destined for significance.

Being a reporter was like a delicate dance with a stranger where you were never quite sure whether you were leading or not, and if you stepped on someone’s toes, that person might run off the dance floor crying.

If you read any book on startups, you knew that the most successful ones had the strongest company culture.

Everything had started bleeding into everything else. These kids–she felt no compunction about calling them kids–expected that their workplaces would provide all this for them, as if work were an extension of college, with its own clubs and student organizations.

“…and his app is so dumb and pointless–like, why do we need something telling us how to cheer up, as though man’s preferred state of being at all times is to be cheerful so that you can do better work or be a better you–which, by the way, is such a startup way of thinking. It’s like they can’t imagine a world where people have actual emotions or feel sad or angry or frustrated; everything has to be fixed immediately…”

Let’s finish this up now, someone is waiting for you on that.
Courtesy is the password to safety.
Things are turning for the bright side.
More Fortunes >