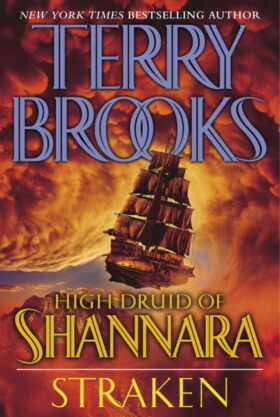 Synopsis: For reasons known only to himself, the King of the Silver River has charged young Penderrin Ohmsford, barely more than a boy, with the daunting task of rescuing his aunt, Grianne, Ard Rhys of the Druid order, from her forced exile in the terrifying dimension of all things damned: the Forbidding. With the noble dwarf Tagwen and the prodigal elven princess Khyber Elessedil by his side–and with the outcome of the bloody war between the Federation and the Free-born at stake–Pen has accepted his mission without question. But not without risk . . . or sacrifice.

Because Shadea a’Ru, the ruthless Druid responsible for imprisoning the true Ard Rhys and usurping leadership at Paranor, has sent her agents and assassins in relentless pursuit of Pen and his comrades. And in securing the talisman he needs to breach the Forbidding, Pen has paid a devastating price. Now if the Free-born forces–already decimated by the Federation’s death-dealing new weapon–should fall, Shadea’s domination of the Four Lands will be assured. Nothing short of Pen’s success can turn the tide.

But Pen’s challenge grows greater when he learns that his parents, Bek Ohmsford and Rue Meridian, have fallen into Shadea’s hands. He must try to help them–but once within the walls of Druid’s Keep, where Shadea’s minions and dark magic lurk at every turn, Pen’s survival is far from assured. Yet it will all pale in comparison to the horrors that wait inside the Forbidding–horrors poised to break free upon the Four Lands when the time is right. . . .

He saw things in simple terms, in the terms of a boy who believed everything was still possible and no reach too great. She knew better. She had a stronger sense of the possible than he did, and that made her cautious of embracing hopes too warmly.

She felt a moment of panic and fought to contain it. Uncle Ahren would calm her if he were there. He would tell her not to think beyond the moment, but to confront what frightened her and bring it under control. She tried doing that, isolating the source of her fear and putting it aside. But it was hard to give it a name or even a shape. Her fear was for something too large and too amorphous to define, an overwhelming sense of smallness and weakness and inexperience in the face of a tidal wave of power and dark intent. She might thrash and struggle. She might try whatever she could to break free of its grip. But in the end. It would have her anyway.

…thinking of them made him wish he could turn time back far enough for them all to be together just once more. But life didn’t give you second chances at such things. Life just swept you along and never took you back to where you had been.

He found himself hoping that the dragon was the most dangerous creature he would come across, but what were the chances of that?

Having a lot always created expectations, and somewhere along the way those expectations would not be met because that was the way the world worked.

Once again, he was being asked to do something without being told exactly how he was supposed to do it.

She looked off into the horizon. “Strength comes to us through belief and determination, Pen. The trick is in recognizing how to use it.”

Fame and fortune are coming your way.
Things are turning for the bright side.
Even a broken clock is right two times a day.
More Fortunes >