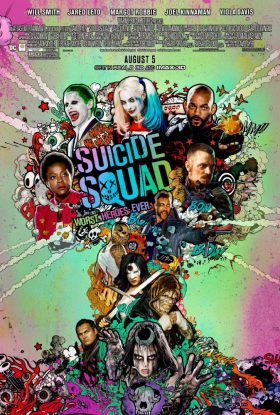 Tagline(s): Justice has a bad side.
Worst. Heroes. Ever.
We need them bad.
In squad we trust
Good Night

Based On: DC Comics Characters from John Ostrander and Lew Schwartz

Synopsis: A secret government agency recruits some of the most dangerous incarcerated super-villains to form a defensive task force. Their first mission: save the world from the apocalypse.

Declassified by Agent Palmer: DC takes a page from Marvel’s playbook for Suicide Squad, but to different results. (No Spoilers)

The Joker: Would you die for me?
Harley Quinn: Yes.
The Joker: That’s too easy. Would you live for me?

Harley Quinn: Huh? What was that? I should kill everyone and escape? Sorry. The voices. Ahaha, I’m kidding! Jeez! That’s not what they really said.

Deadshot: You know the dark places, too. Don’t act like you don’t.

Rick Flag: Seriously, what the hell is wrong with you people?
Harley Quinn: We’re bad guys. It’s what we do.

Amanda Waller: I want to build a team of some very dangerous people, who I think can do some good.

Deadshot: Here’s to honor among thieves.
Katana: Not a thief.
Deadshot: Oh, she’s not a thief.
Captain Boomerang: I actually prefer to think of myself as an asset relocation specialist.
Deadshot: Well, we almost pulled it off despite what everybody thought.
Diablo: We weren’t picked to succeed. You know that, right? We were all chosen to fail.
Deadshot: Yeah, I know that. Worst part of it is they’re going to blame us for the whole thing. They can’t have people knowing the truth. We’re the patsies; the cover up. Don’t forget, we’re the bad guys.

Amanda Waller: It’s taken me some time, but I finally have them. The worst of the worst.

Dexter Tolliver: Gentleman, ladies: what if Superman had decided to fly down, rip off the roof of the White House, and grab the president right out of the Oval Office. Who would’a stopped him?

Deadshot: You gonna fight with us?
Diablo: What if I lose control?
Deadshot: Then maybe we’ll have a chance.