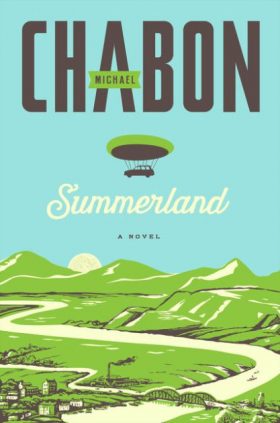 Synopsis: For over a century, the people of Clam Island, Washington, have enjoyed barbecues and baseball games at Summerland, on the western tip of the island, where it never rains. The small beings–known as ferishers–who ensure this perfect weather, however, are threatened by an ancient enemy and need a hero–a baseball star, in fact–to vanquish their foe. Summerland is the story of Ethan Feld, the worst ball player in the history of the game, recruited by a hundred-year-old scout called Ringfinger Brown, himself a Negro League Legend. Accompanied by his determined friend, Jennifer T. Rideout, and guided by a friendly werefox, Ethan struggles to defeat giants, bat-winged goblins, and one of the toughest ballclubs in the realms of magic, to save all the Summerlands, and ultimately the world.

Declassified by Agent Palmer: Summerland by Michael Chabon is what happens when the High Fantasy meets Baseball

Children, like scientists–and, at our best moments, like writers–know that the deepest mysteries are encountered when we are paying closest attention.

In the fall of 2000, around the time that Kavalier & Clay was published, motivated in part by the desire to try something different after the long, dense slog of writing that book, and in party by the experience of a family car trip spent listening to Jim Dale’s thrilling recording of the first Harry Potter, I determined to write a novel that would be set in an “American faerie,” an idea that had been lying in a dusty alcove of my imagination for at least twenty-five years.

If you publish a novel, and if people read it, it’s usually not too long before some of those people start asking you, like the parents of a teenage shoplifter caught wearing a brand-new pair of sneakers, where you got it. The problem, at least in my case, is that most of the time, and certainly in the period immediately following a book’s completion, the only truly honest reply to such a question happens to be a phrase that I have always found to be among the hardest, of all phrases, to utter: “I don’t know.”

Long before we have the power or the opportunity to give offense to it, the world has already set itself against us.

“to grasp the fundamental truth; a baseball game is nothing but a great slow contraption for getting you to pay attention to the cadence of a summer day.”

Mr. Feld felt that people who believed in other worlds were simply not paying enough attention to this one.

“It’s powerful stuff,” he said. “Putting down the Signs.”

But there was nothing that Mooseknuckle John could say, no curse he could utter or horrible punishment impose, because he and Ethan had stuck a bargain, and in the two remaining eldritch worlds, as here in the Middling once upon a time, the stuff of a sworn bargain is a metal less yeilding than iron.

Finer minds than my own have forever dulled their edges trying to explain the workings of clocks and calendars among the worlds.

Baseball games were like that. Get a pitcher into a jam, send a bunch of guys to the plate, and half an inning could take an hour to play. And then the next two full innings might fly past in under thirty minutes. Baseball moved at a Coyote pace, now wandering, now moving at a steady lope, now bearing down hard and quick.

They had all taken to consulting Ethan’s watch, frequently, like a team in the hunt for a pennant watching the out-of-town scoreboard. They had the same sense of disconnected connection to the unimaginable events in the Winterlands that the Red Sox feel when the Yankees play the Orioles: there was nothing they could do to influence the outcome of that other crucial game. They just hat to keep moving forward, to keep on playing their best.

And in that moment he felt–for the first time that optimistic and cheerful boy allowed himself to feel–how badly made life was, how flawed. No matter how richly furnished you made it, with all the noise and variety of Something, Nothing always found a way in, seeped through the cracks and patches. Mr. Feld was right; life was like baseball filled with loss and error, with bad hops and wild pitches, a game in which even champions lost almost as often as they won, and even the best hitters were put out seventy percent of the time.

It really is a shame that through our sad neglect of wonder, hopefulness, and trust we allowed so much clutter and debris to build up in the space that once connected us…

Even a broken clock is right two times a day.
To let another into your heart, first let yourself in.
Let’s finish this up now, someone is waiting for you on that.
More Fortunes >