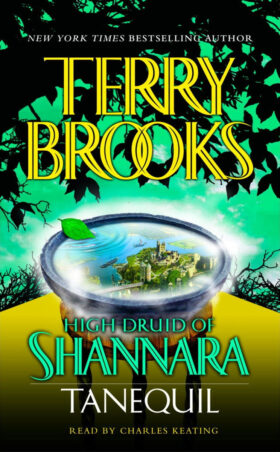 Synopsis: Loyal to none but herself and lethal even to those closest to her, Shadea a’Ru now holds sway as High Druid of Paranor–her ascension to power all but unchallenged in the wake of Grianne Ohmsford’s sudden, mysterious vanishing. Only Shadea and her catspaw–the treacherous Prime Minister Sen Dunsidan–know the secret fate of the true Ard Rhys . . . for it was they who engineered it, by means of dark magic. And now Grianne languishes in the fearsome and inescapable netherworld called the Forbidding.

Their bloodless coup a success, the corrupt pair, and their confederates within the Druid Council, seeks to make their dominion over the Four Lands absolute–with the aid of a devastating new weapon. But it could all be undone if Grianne’s young nephew, Penderrin, succeeds in his frantic quest to rescue her. Shadea’s airship-borne minions and the relentless assassin under her command continue their fierce pursuit of Pen and his comrades.

Eluding death is only half the battle for Pen. To breach the Forbidding and bring Grianne back to the natural world means finding the fabled Tanequil . . . and the talisman it alone can provide. That means journeying into the Inkrim–a dreaded region thick with shadows and haunted by harrowing legends. It also means striking a bargain more dire than Pen could ever imagine. But there can be no turning back. For in her unearthly prison, the Ard Rhys faces a demonic plight too hideous to countenance. . . .

He can tell himself anything, make any promise he wished, but promises were only words until more than words were required.

Power fostered fear, and fear mistrust. The Druid order was for many the genesis of all three.

She let them work without supervision or deadlines because her unpredictability was all the incentive they required. A little uncertainty and a few object lessons were strong motivators.

Misguided and corrupt, they had yielded to the temptations offered them and unwittingly opened the door that imprisoned it. So desperate were they to indulge their own greed that they had never stopped to think what it was they were really doing. How easily manipulated they had been!

She began work again on the buckle as soon as she was done. She was stronger now, both physically and emotionally, and she stuck with the endeavor long after common sense told her it wasn’t working. She did so because she couldn’t think of anything better to do or any other plan to try. There were times, she knew from experience, when it was best just to continue on rather than to shift directions, even when it didn’t seem as if you were getting anywhere. Your chances of success weren’t always something you could measure accurately. Perseverance in the face of failure counted for something.

Everything about the Druid’s Keep was measured in layers of silence, as if sound were an unwelcome intrusion. Perhaps it was, where power resided in such quantity and struggles to control it were all done through secret machinations and subtle deceits.

He used his tiny magic, his strange gift, to seek anything that might be waiting.

…She knew better than to put anything past the Ohmsfords. Their history spoke for itself. They had survived impossible situations before, several generations of them. They were imbued with both magic and luck, and the combination had kept them from harm more times than anyone could count.

Don’t overstep. Don’t over react. Don’t rush to your own doom.

There was never gain without risk, and risk always raised doubts.

There was no place, even in the world of demons, for something that lacked any moral center or recognizable purpose. She saw herself as they did, a damaged and conflicted creature, a chameleon that could not distinguish between reality and fantasy, able to be either or both, but unable to tell the difference.

Hindsight suggested possibilities, but hindsight was deceptive, sifted through a filter of distance and reason. Things were never so easy as they seemed later. They were mostly wild and confused and emotionally charged. Hindsight pretended otherwise.

Look forward to great fortune and a new lease on life!
The path of life shall lead upwards for you.
To let another into your heart, first let yourself in.
More Fortunes >