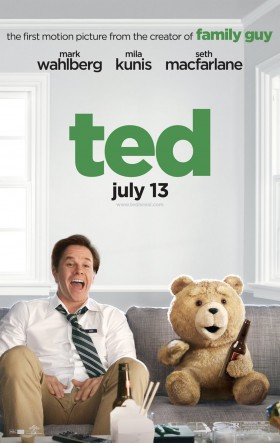 Synopsis: From the creator of Family Guy comes a movie about John Bennett, whose wish of bringing his teddy bear to life came true. Now, John must decide between keeping the relationship with the teddy bear or his girlfriend, Lori.

Narrator: Now if there’s one thing you can be sure of, it’s that nothing is more powerful than a young boy’s wish. Except an Apache helicopter. An Apache helicopter has machine guns AND missiles. It is an unbelievably impressive complement of weaponry, an absolute death machine.

Ted: There. Proof. Garfield’s eye look like a pair of tits.

Lori: I don’t – I don’t understand. I really don’t. You’re 35 years old and you’re still scared of a little thunder?
John: I am not!
Ted: Thunder buddies for life, right, Johnny?
John: Fucking right.
Ted: Alright, come on, let’s sing the thunder song.
John: Alright.
John, Ted: When you hear the sound of thunder, / Don’t you get too scared. / Just grab your thunder buddy / And say these magic words: / “Fuck you, thunder! / You can suck my dick! / You can’t get me thunder / ‘Cause you’re just God’s farts!”

Ted: You can sing any 90’s song with just vowels.

Narrator: No matter how big a splash you make in this world whether you’re Corey Feldman, Frankie Muniz, Justin Bieber or a talking teddy bear, eventually, nobody gives a shit.

Courtesy is the password to safety.
Even the greatest of whales is helpless in the middle of a desert.
Fame and fortune are coming your way.
More Fortunes >