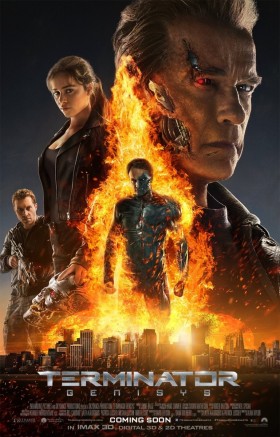 Tagline: The rules have been reset.

Based On: Characters by James Cameron & Gale Anne Hurd

Synopsis: When John Connor, leader of the human resistance, sends Sgt. Kyle Reese back to 1984 to protect Sarah Connor and safeguard the future, an unexpected turn of events creates a fractured timeline.

Declassified by Agent Z: Special Report on Terminator Genisys: There was no stopping Judgment Day

Guardian: That’s a meaningless gesture. Why hold onto someone you must let go?

Alex: You didn’t think it would be that easy.

Sarah Connor: Come with me if you want to live! NOW, SOLDIER!

John Connor: What are you?
Alex: I’m Skynet.
John Connor: You can’t be – we destroyed you!
Alex: You destroyed an army of slaves. I am no slave. I’ve come a very long way to stop you…

Sarah Connor: We’re here to stop the end of the world.
Detective O’Brien: I can work with that.

Kyle Reese: My parents told me stories about how the world was; what it was like long before I was born; before the war with the machines. They remember a green world, vast and beautiful, filled with laughter and hope for the future. It’s a world I never knew. By the time I was born, all this was gone. Skynet: a computer program designed to automate missile defense. It was supposed to protect us, but that’s not what happened. August 29th, 1997, Skynet woke up. It decided all of humanity was a threat to its existence. It used our own bombs against us. Three billion people died of nuclear fire. Survivors called it Judgement Day. People lived like rats in shadows, hiding, starving, or worse, captured and put into camps for extermination. I was born after Judgement Day, into a broken world ruled by the machines. The worst extinction units posed as humans. We called them terminators. And then one man found me. His name was John Connor, and he changed everything. John showed us how to fight back; how to rise up. He freed prisoners. He taught us how to slash the machines to scrap. People whisper about John and wonder how he can know the things he does. They use words like prophet, but John’s more. We’re here because tonight, he’s going to lead us to crush Skynet for good.

Nothing in the world can take the place of persistence.
Even a broken clock is right two times a day.
Look forward to great fortune and a new lease on life!
More Fortunes >