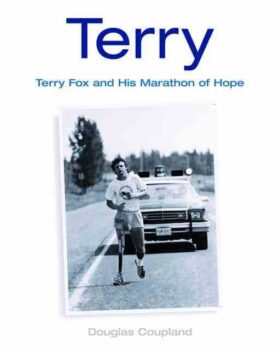 Tagline: Terry Fox and His Marathon of Hope

Synopsis: In the summer of 1980, a fresh-faced young athlete who’d lost a leg to cancer decided to run across Canada to raise money for research in the fight against the disease. In the course of 143 days, he ran 3,339 miles and transformed the way that we look at our lives and our very bodies. His name was Terry Fox.

Now, twenty-five years later, here is a collection of never-before-seen photos and objects from the life of Terry Fox, Canada’s truest hero. Written for both adults and for families, this is a book that is meant to be shared with those who remember Terry’s run, and for those who are now learning about it.

From start to finish, this book tells a story of spellbinding intensity, intimacy and honesty. Readers witness Terry’s young life, the illness that cost him a leg, his decision to rise above his fate, and his cross-Canada run that won the hearts of a nation. And then, after his too-early death, came the creation and growth of Terry’s legacy, to raise money to find a cure for cancer so that others might live.

“I remember promising myself tha should I live “I would prove myself deserving of life.” – Terry Fox

On March 3, Terry was sent for X-rays at Royal Columbian Hospital in New Westminster. There, Dr. Piper, an orthopaedic specialist, looked at the shadows on Terry’s knee on the X-rays and suspected that it was osteogenic sarcoma (also called osteosarcoma). This is a form of cancer that strikes men more than women, usually between ages ten to twenty five, at a point in the life cycle when the body is growing most rapidly. It is a cancer of the connective and supportive tissues, and it’s the most common primary cancer of the bone. Often the cancer starts in the knee, then works its way outward into surrounding muscles and tendons.

On the night before his operation, Terry’s senior high school coach, Terri Fleming, visited him in the hospital. Not quite knowing what to say, he showed Terry a magazine article about an above-the-knee amputee who had run in the New York Marathon. The coach doesn’t remember the article making a big impression, but it planted the seed for Terry’s idea to run across Canada.

Terry’s attitude to cancer was never “Why me?” but rather, “Why not me?” …He was a fun-loving teenage guy trying to joke about the bad hand fate had dealt him.

Friends and family agree that Terry’s hospital stays deeply changed him, made him grow up beyond his years. And it was in the hospital that Terry understood that miracles are fine, but cancer research is what actually changes the world and what gives hope to the hopeless.

However, the most startling thing about these photographs is that they were taken just over four years after Terry stood in the same corner of the same living room wearing his graduation tux (page 14). In just four years this guy from a typical Canadian suburb changed the world. If any of us are ever in need of reminding that life has surprises in store for us, these photos offer more than enough testament.

It was during this photo shoot that Terry said out loud the words, “Even though I die of cancer my spirit didn’t die and that should influence a lot of people.”

To many people, Terry never stopped running. Day or night he’s still near us, passing by the outskirts of the cities we live in: he’s out there in the Rockies and out there amidst the fields, out there on the Canadian highways, with his strange hop-click-thunk step, forever fine and forever keeping the best parts of ourselves alive, too.

Since 1980, cancer research-thanks very much in part to Terry has leapt ahead several generations. Were he to have the same cancer today, not only would he keep his leg but he’d probably be alive and well. Terry got it right research equals hope. More research equals more hope.

This is a listing of where the just over $17-million-dollar allotment from the Terry Fox Foundation went in 2004/2005. It’s written in clean technical prose and is worth the extra effort to read. As you’ll see, the research is of breakthrough quality and international in its scope and every penny spent on funding is a very realistic penny towards cures. None of the research described here would be underway if Terry had never begun his run-multiply these pages by twenty-four years and you can see how wonderful Terry’s legacy is and the legacy of everybody who joins in the annual Terry Fox Run.
Below are lists of where the money goes in the form of New Research Grants, Continuing Research Grants, New Research Personnel Awards and Continuing Research Personnel Awards.
There is a difference between grants and awards. Grants are for the direct costs of doing research, such as test tubes, chemicals, etc., and the grants go to the principal investigator via his/her institution. Awards are stipends that are paid to individuals in the form of training awards: studentships and post-doctoral fellowships.
Grants support the research, and awards support the competitively awarded stipends of trainees.
The grand total of funds disbursed in 2004/2005: $17,163,801.

To let another into your heart, first let yourself in.
Courtesy is the password to safety.
Nothing in the world can take the place of persistence.
More Fortunes >