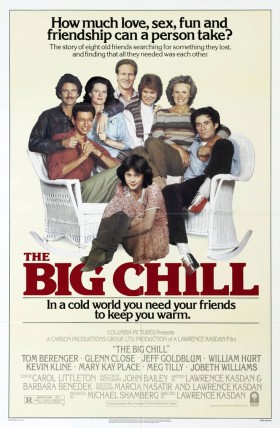 Synopsis: A group of seven former college friends gather for a weekend reunion at a South Carolina winter house after the funeral of one of their friends.

Declassified by Agent Palmer: The Big Chill is a movie about Love, Loss and Friendship with some very Transcendent Quotes

Michael: Amazing tradition. They throw a great party for you on the one day they know you can’t come.

Sam: Do you think we’re all trying trying to avoid dealing with Alex? You know, every time it comes up somebody changes the subject.
Nick: Hey, it’s a dead subject.

Chloe: Alex and I made love the night before he died. It was fantastic.
Nick: He went out with a bang, not a whimper.

Minister: Are not the satisfactions of being a good man among our common men great enough to sustain us anymore?

Richard: There’s some asshole at work you have to kowtow to, and you find yourself doing things you thought you’d never do. But you try and minimize that stuff; be the best person you can be. But you set your priorities. And that’s the way life is. I wonder if your friend Alex knew that. One thing’s for sure, he couldn’t live with it. I know I shouldn’t talk; you guys knew him. But the thing is… no one ever said it would be fun. At least… no one ever said it to me.

Nick: Wrong, a long time ago we knew each other for a short period of time; you don’t know anything about me. It was easy back then. No one had a cushier berth than we did. It’s not surprising our friendship could survive that. It’s only out there in the real world that it gets tough.

Harold: What is it with you? Is jail another “experience” you want to “try?” See what that’s “like?” You know, I live here. This place means something to me. I’m dug in. I don’t need this shit.

Chloe: I haven’t met that many happy people in my life. How do they act?

Meg: It’s a cold world out there. Sometimes I feel like I’m getting a little frosty myself.

Michael: Harold, don’t you have any other music , you know, from this century?
Harold: There is no other music, not in my house.
Michael: There’s been a lot of terrific music in the last ten years.
Harold: Like what?

Richard: Nothing like you described. Not at all. Not one of those people looks like I thought they would. I can’t believe these are the people you’ve talked about all these years. I’d love to hear the way you describe me to them.

Michael: Where I work we have only one editorial rule: No writing longer than an average person can read during an average crap.

Sarah: I was at my best when I was with you people.
Sam: When I lost touch with this group, I lost my idea of what I should be. Maybe that’s what happened to Alex? At least we expected something of each other then, I think we needed that.

Harold: How much sex, fun, friendship can one man take.

Chloe: I don’t like talking about the past as much as you guys do…

Chloe: He (Alex) said we made a good couple, because I had no expectations and he had too many.

Michael: Friendship is the bread of life…but money is the honey.

Pastor: ….a brilliant physics student at the University of Michigan who paradoxically chose to turn his back on science and taste of life through a seemingly random series of occupations… Where did Alex’s hope go?

Over Friday’s Dinner: –You’re telling me you relax with video games? –Don’t knock video games. –Jesus, I let you guys out of my sight for a little while and you develop a bunch of moronic interests. –Don’t knock morons.

To let another into your heart, first let yourself in.
Today it’s okay to make a few choices by going with your instincts.
You are interested in higher education, whether material or spiritual.
More Fortunes >