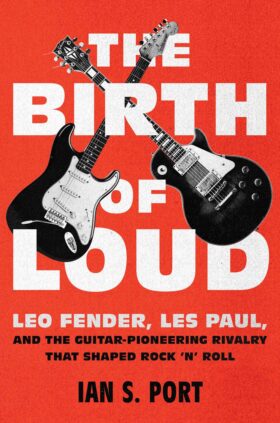 The Birth of Loud

Synopsis: In the years after World War II, music was evolving from big-band jazz into rock ’n’ roll—and these louder styles demanded revolutionary instruments. When Leo Fender’s tiny firm marketed the first solid-body electric guitar, the Esquire, musicians immediately saw its appeal. Not to be out-maneuvered, Gibson, the largest guitar manufacturer, raced to build a competitive product. The company designed an “axe” that would make Fender’s Esquire look cheap and convinced Les Paul—whose endorsement Leo Fender had sought—to put his name on it. Thus was born the guitar world’s most heated rivalry: Gibson versus Fender, Les versus Leo.

Declassified by Agent Palmer: The Birth of Loud: Follows the Creation and Adoption of Iconic Electric Guitars

…the solid-body electric guitar, an instrument that simply can’t be attributed to one single person.

How much bigger, how much broader, could the electric guitar really get?
But all around the country, all around the world, a new generation of musicians was preparing to answer that question in a way that Leo Fender, seeking to retreat from his company, and Les Paul, slowly resigning himself to the idea of retirement, would never have believed. Only through the sounds and stories of these musicians would the ultimate legacy of Leo Fender and Les Paul become clear.

its transformation from a key accessory of youth pop music into an apparatus for more grown-up and dangerous modes of expression.

Fenders and Les Pauls were twins, opposites, companions–rivals that were remarkably complementary. Through the odd meanderings of time and fashion and technology, two musical instruments born largely in 1940s Hollywood had risen to become the cherished tools of an unfathomably louder age. The guitars of Leo and Les har far outlived the dreams of their makers–and yet, to the current generation of players, and to future ones, they were just being born.

You have to feel sorry for writers’ friends: the generous ones get buried by drafts and then blasted by their friends’ insecurities.

Fame and fortune are coming your way.
To let another into your heart, first let yourself in.
Sharing little joys offer great hope to others.
More Fortunes >