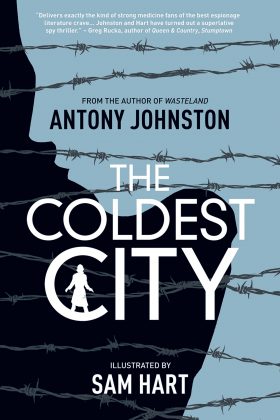 Synopsis: As Communism collapses and the Berlin Wall crumbles, an undercover MI6 spy is killed while carrying priceless information — a list containing the name of every spy in Berlin.

MI6 sends in veteran operative Lorraine Broughton to recover the list. But she walks into a powder keg of social unrest, counter-espionage, defections gone bad, and secret assassins…

“Some of them are saying there’ll be no more secrets from now on. But you and I both know that’s not true.”

“Not just him, of course. Most of the Allied officers in Berlin have been there for years, with no Embassy to watch over them. They’ve all gone bloody native.

“I don’t care how you get it, who you upset, or where it takes you. Bring it home.”

Nobody besides myself, C, and BER-1 is inside this. Not Bonn, not the FCO, not even the PM. You’re out in the cold until you come home.”

“What’s he like, sir? David Perceval?”
“A right, royal pain in the arse. And a bloody good spy.”

“Bugger me, it’s freezing today.”
“I like the cold. Everything smells clean and fresh.”

“The KGB doesn’t go around shooting British officers for fun. The game was never that blatant, not even in the glory days.”

Look forward to great fortune and a new lease on life!
Today it’s okay to make a few choices by going with your instincts.
Sharing little joys offer great hope to others.
More Fortunes >