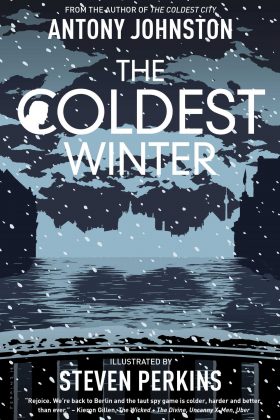 Synopsis: After a string of botched assignments for MI6 in Berlin, David Perceval is being sent home. Even his final mission before leaving ― the defection of a Soviet scientist ― goes badly wrong, as the coldest winter for 30 years descends on Europe.

With transport out of Berlin impossible, and the KGB searching everywhere for their lost scientist, Perceval must improvise a deadly game of cat and mouse through the frozen city to keep the Russians at bay, and deliver his own unique brand of revenge!

Declassified by Agent Palmer: A Spoiler Free Review of The Coldest Winter by Antony Johnston

“Gave up on the crossword, I’m afraid. Never did like cryptics.” Perceval

“As if anything happens in Paris! Good god, what’s the point of doing this job if I’m not achieving anything? I’m not a bloody diplomat!” Perceval

“What they hate is noise. Something you make too much of.”

“This is a chance to prove yourself before going home. Your past record won’t sustain you forever, and at this rate you’ll be lucky not to end up in bloody Canada.”

“Bloody Yanks, always turning up at the last minute to hog the glory.”
“Damn Limeys, always picking fights they can’t win without our help.”

“But not clever enough.”
“Of course not. Still, it has been… stimulating. I will try to avoid killing him.”

“Bastard… Ivan…”
“I have no wish to kill you. You have made my time in Berlin very interesting. But you must accept your inevitable defeat.”

Good clothes open many doors. Go Shopping.
Things are turning for the bright side.
You are interested in higher education, whether material or spiritual.
More Fortunes >