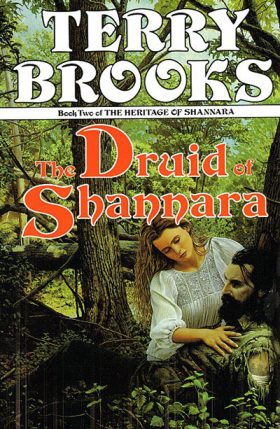 The Druid of Shannara

Tagline: Book Two of The Heritage of Shannara

Synopsis: The continuing Saga of Walker Boh in the Heritage of Shannara series as he seeks to raise forgotten Paranor.

Declassified by Agent Palmer: 10 Spoiler Free Quotes from The Druid of Shannara by Terry Brooks

“Walker, the magic makes you special,” she said. “It is a gift that you must care for and cherish. I know that someday you are going to do something wonderful with it.”

And Kenner had repeated, “There is always purpose in magic–even when we don’t understand what it is.”

This isn’t working out the way I expected, he thought bleakly and then everything went black.

They jammed the roadside expectantly, some come simply out of a sense of curiosity, most come out of their need to find something to believe in again.

“Ha! That’s the ache of your joints you feel, nothing more! You believe what you want to believe, not what is. The truth is that we have no more sense of who this girl is than we do of what tomorrow will bring. It is pointless to get our hopes up!”
“It is more pointless to keep them down!”

Death was the twin brother of life and the more interesting of the two. It was secretive, unknown, mysterious. It was inevitable and forever when it came. It was dark, infinitely chambered fortress waiting to be explored. Most entered only once and then only because they had no choice. Pe Ell wanted to enter at every opportunity and the chance to do so was offered through those he killed.

For most, there was the past, the present, and the future. Not for Pe Ell. The past was nothing more than memories, and memories were stale reminders of what had been lost. The future was a vague promise–dreams and puffs of smoke. He had no use for either. Only the present mattered, because the present was the here and now of what you were, the happening of life, the immediacy of death, and it could be controlled as neither past nor future could. Pe Ell believed in control. The present was an ever-evolving chain of moments that living and dying forged, and you were always there to see it come.

“We use so many words to describe what happens to us, and it all amounts to the same thing. We live out our lives as we are meant to live them–with some choice, with some chance, but mostly as a result of the persons we are.”

“I’ll take you because it’s true that I haven’t seen everything or found all the answers and what’s life for if not to keep trying–even when I don’t believe that trying will be enough.”

His mind darted away into his memories only to find the past forever beyond his reach and the present forever at hand.

He wrestled with the specter of his destiny in the silence of his thoughts.

Morgan laughed in spite of himself. “Brave soldiers? Or fools?”
“Maybe both. And maybe we are just stubborn.”

He had given so much of himself to the struggle to understand and control the purpose of his life, battling with the twin specters of legacy and fate.

He no longer questioned that his doubt must give way to resolution; he did not choose to mire himself further in the “what ifs” that had plagued him for so long. Circumstance had placed him here, and that was enough.

His decision to do so had been long in coming and repeatedly questioned. It had resulted from an odd mix of circumstance, conscience, and deliberation.

“Nothing given freely is ever given up.
It will be given back to you
Through others’ love and trust.”

“High, low, wherever we may go,
I’ll have to keep on shouting out to you.”

“Five travelers crossed field and stream
And Eastland forests wide.
They crossed the Charnal Mountain range
To gain the Northland side.
Tra-la-ladiddie-oh-day.

Five travelers came from afar
And entered Urda Land.
They braved the dangers of the Spikes
To meet King Carisman.
Tra-la-la-diddie-oh-day.”

“There was a young tunesmith from Rampling,
Who felt it was time to take wing.
He decided to hike,
North into the Spikes,
To the Urdas, who made him their king!”

“Come hither, my fellows, and lady, come nigh,
There are worlds to discover more’n what meets the eye.
Far reaches to travel and people to see,
Wonders to gaze on and lives for to lead,
A million adventures to try.

Come hither, my fellows, and lady, come nigh,
A tunesmith’s a man who must sing for to fly.
He searches the byways for songs telling truth,
Seeks out hidden meanings and offers of proof,
Of the reasons for being alive.

Come hither, my fellows, and lady, come nigh,
For life’s to be found in the rivers and skies.
In the forests and mountains that lie far away,
In the creatures that frolic and gambol and play,
And beg me my songs to apply.”

“No matter how high or lofty the throne,
What sits on it is the same as your own.”

“Sticks and stones will break your bones,
But only if the spears don’t.
There’s traps and snares placed everywhere,
And none to warn if I don’t.
Fiddle-de-diddle-de-de.”

“Made in the shape of humankind,
To serve the Stone King’s dark design,
The Maw Grint tunnels ‘neath the land,
A horror wrought by father’s hand,
Become a monster out of need,
With no true hope of being freed,
It hunts.”

“Darkness is for bats and cats and frightened little mice,
It’s not for those of us who find the sunshine rather nice,
So stay away from Eldwist’s murk and take this good advice,
Go someplace where your skin is warm instead of cold as ice.”

“Awake, awake, oh aged King of Stone,
Come forth from your enfolding lair,
We wait without, a worn and tired band,
So lacking in all hope and care.

Awake, awake, oh aged King of Stone,
Be not afraid of what we bring,
‘Tis nothing more than finite spirit,
A measure of the song I sing.

Awake, awake, oh aged King of Stone,
You who have seen all passing of time,
Share with us weak and mortal creatures,
The truths and secrets of Mankind.”

To let another into your heart, first let yourself in.
Whoever wants to reach a distant goal must take small steps.
Your moods signal a period of change.
More Fortunes >