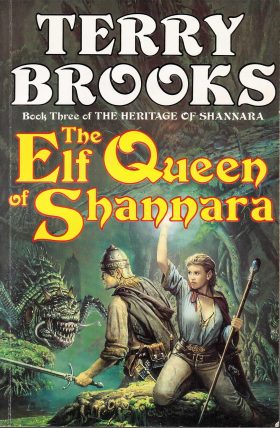 The Elf Queen of Shannara

Synopsis: Wren Ohmsford undertakes the charge given to her by the Shade of Allanon to bring the Elves back to the Four Lands.

Declassified by Agent Palmer: The Elf Queen of Shannara is about Destiny, Magic, Identity, and Truth.

She had asked herself once before, once right at the beginning when she had decided she would try to learn something about who she was, What would happen if she did not like what she discovered? She had dismissed the possibility. She was worried now that she had made a very big mistake.

What had she done? Her mind spun with the enormity of the commitment she was making, and she was forced to wonder, if only in the privacy of her own thoughts, whether she would have cause to regret her brashness.

“We are given our destiny in life by something we can neither understand nor control, and it binds us to our future as surely as any magic.”

“Let me tell you something you haven’t learned yet, something you learn only by living a while. As you get older, you find that life begins to wear you down. Doesn’t matter who you are or what you do, it happens. Experience, time, events–they all conspire against you to steal away your energy, to erode your confidence, to make you question things you wouldn’t have given a second thought to when you were young. It happens gradually, a chipping away that you don’t even notice at first, and then one day it’s there. You wake up and you just don’t have the fire anymore.”

“Listen to me. Do not proclaim what you will do and how you will be until you understand what is required of you. This is not simply a matter of accepting a charge and carrying it out. It was never that. Acceptance of who you are and what you must do is just the first of many steps your journey requires.”

The truth was an elusive bit of cloth that would not be contained, that refused to be revealed. It fluttered away at each approach she made, ragged and worn, a shimmer of color and light.

“They were appalled that the magic had been so misused. For it was an inaccurate and changeable magic at best, and what they created was not always what they desired.”

Daybreak arrived, a stealthy apparition cloaked iron-gray against the shadow of departing night as it crept uncertainly out of yesterday in search of tomorrow.

There was an ache in the heart on such perfect days, a longing that they could last forever stitched against the knowledge that tomorrow would be different, that in life few promises were given.

Sharing little joys offer great hope to others.
To let another into your heart, first let yourself in.
Today it’s okay to make a few choices by going with your instincts.
More Fortunes >