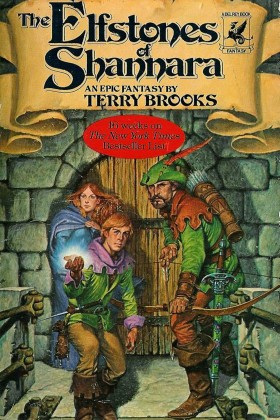 The Elfstones of Shannara

Synopsis: Ancient Evil threatens the Elves: The ancient tree created by long-lost Elven magic, is dying. When Wil Ohmsford is summoned to guard the Amberle on a perilous quest to gather a new seed for a new tree, he is faced with the Reaper, the most fearsome of all Demons. And Wil is without power to control them…

Declassified by Agent Palmer: A Spoiler Free Book Review: The Elfstones of Shannara

“The Chosen were the caretakers of the Ellrys, the strange and wondrous tree that stood at the center of the Gardens—the tree, as the legends told, that served as protector against a primordial evil that had very nearly destroyed the Elves centuries ago, an evil that had been shut away from the earth since before the dawn of the old race of Men.”

“The legend was not legend. The legend was life. Evil did indeed lie beyond a Forbidding that the Ellcrys maintained. Only she kept the Elven people safe. And now she was dying.”

“If one of the Chosen were permitted to carry a seed of the tree to the source of her power, the Ellcrys might be reborn and the Forbidding invoked again.”

“‘Child, that you were mine,’ he whispered. He stepped closer, reaching up to take…”

“Evil contained is not evil destroyed.”

“But your responsibilities are sometimes given you without choice, without consent.”

Even the greatest of whales is helpless in the middle of a desert.
Today it’s okay to make a few choices by going with your instincts.
Whoever wants to reach a distant goal must take small steps.
More Fortunes >