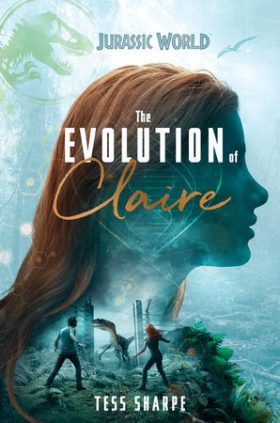 The Evolution of Claire

Synopsis: Freshman year in college is full of obstacles–there are messy roommates, cranky professors, and disgusting dining halls. But for Claire Dearing, add “How to properly avoid being eaten by a dinosaur” to that list.

The year is 2004, and Claire has been given the chance of a lifetime: the opportunity to intern at the Jurassic World theme park less than a year before it opens to the public. She is laser-focused, with her sights set on bettering the lives of all animals worldwide. But life at the park isn’t all test-driving gyrospheres and falling head over heels for a fellow student named Justin . . . though she does that too. Rumors and suspicions flood the island, and Claire is determined to unravel the truth.

As Claire searches for answers, she and Justin find themselves thrust into a sinister plot that will leave Claire forever changed, forcing her to question everything she thought she knew and bringing her one step closer to the Claire viewers met in Jurassic World and who they’ll return to in Jurassic World: Fallen Kingdom.

Declassified by Agent Palmer: From Intern to Park Manager: The Evolution of Claire by Tess Sharpe (A Spoiler Free Review)

The thing about running scared? You can’t run forever.

Survival is written in their DNA, but I worry it’s being written out of ours. In our spot at the top of the food chain, we’ve grown so complacent. So content. So very destructive.

All it takes is one person, determined to rise, to get enough power to give a voice to the voiceless.

There’s a lot my parents never quite got. They try. They’re wonderful. I love them. But there’s something in me that wants more than a little family in a little house with a quiet little life. And I’ve never figured out a way to say that without sounding mean or scornful.

It’s the fundamental difference between us: Karen is built to stay.
And I am built to run. Not away, but forward. And running forward means sometimes leaving things–people–behind.

When they announced Dr. Hammond’s breakthroughs after the photos of the first dinosaurs surfaced, I was twelve. Some people called it a nightmare, especially when news got out about what happened with Dr. Hammond’s first park, the one that never opened.

But for me, it was like a dream. It still is. It’s the impossible fantasy and the wild frontier of scientific innovation. It’s the chance to re-create the past and forge it into the future . . . to experience the very start of something enormous–the beginning of a new cycle of evolution itself.

But life’s about conflict, isn’t it? History is. Evolution is.

Discovering that dinosaurs existed was pretty much the event of my childhood. It was for everyone. There was so much mystery around their existence for the first few years, and then Dr. Hammond’s death added even more questions.

Ever since Mr. Masrani announced he was going to develop and protect Isla Nublar and bring Dr. Hammond’s research full circle, I’ve felt drawn to it. To the work, to the island, to the innovation and refuge this next step presented. Isla Nublar is a sanctuary. A place where science makes miracles happen.
But it’s not just that.
I think . . .
I think it’s the fact that it’s an island of outsiders. Occupied by people who push dreams to the very edge of human limits and animals that should not exist but do.
Sometimes I feel that way. Like my shoulders are rubbed raw from people’s expectations. Like I should not be, but I am. I persist, even if they don’t like it.
Just like the dinosaurs.

I’m swaying back and forth along an edge, and I know the fall will be hard. I only pray that it’ll leave me bruised, not broken.

If you ask yourself enough questions, the right one might lead you down a rarified path . . . the kind that leaves your names in the history books.

One Christmas I got this book about historical women. Stories about women like Ada Lovelace and Ida B. Wells and Phyllis Wheatley. I was just starting to understand that the history books . . . the science texts I loved so . . . they weren’t as full of women who changed the world as they should be. So I loved this book. It was proof, but it was also a lesson.

The thing guys like Wyatt don’t understand is that we always belong to ourselves, in a relationship, and out of it. And the right person knows that. That’s why I put an end to seeing Jackson, the guy who said I was cold like my lizard. Because why would I waste my time? I could be doing so much more important things.

Being alone isn’t scary. Or it shouldn’t be. But for some people, I think it is. And it can lead to bad decisions. Hurtful ones.

Sometimes you have those moments that are almost prophetic, when you know, without a doubt, that what happens next will change everything.
I guess I just never realized how much changing everything would cost in the end.

And they’re enormous. Bigger than I even imagined, even though . . . I knew. I’ve seen the fossils and the reconstructed skeletons and all the documentaries.
Intellectually, I knew.
But emotionally? I had no idea. Nothing can compare to seeing them, right then, right there, in the flesh, their strange, ancient voices carried on the wind. Tears prick at my eyes, to my embarrassment. Normally, I’d be mortified, but there are dinosaurs creeping out of the trees and into full view, so at this moment, I do not care about tears or shame or anything else.

The light in Mr. Masrani’s eyes deepens. This is where he gets his joy, I realize as I turn back to the grasslands. This place, it’s as much of a haven for him as it is for the dinosaurs. And being able to share your greatest joy with people who appreciate it . . . that’s a rare gift, isn’t it?

My cheeks turn red, because he’s quoting my essay back to me. Simon Masrani is quoting me to me, and I don’t even know what to say in response.

That is the power of asking yourself what if?

“Nature always finds a way,” I say.
Dr. Wu quirks an eyebrow. “Explain.”
“You make them all female so they won’t reproduce. But nature always finds a way. So do women, generally. Though with us, it’s more just battering against society than fighting nature’s forces. But here, with dinosaurs, you must constantly keep one step ahead of nature. Because they’ll evolve, no matter how many choices you make, or how many different DNA strands you splice into theirs. Evolution is what the beginning and the end have in common. You lose sight of that and none of this will matter, because we’ll be the ones going extinct.”

I’m a rule follower. I’ll be the first to admit it.
But there’s a streak in me that’s part ruthless, part righteous–a twist of opposites, stronger together than apart.

“You think you can threaten me?”
“Well, I don’t think I can. I know I can. Because I just did,” I say, refusing to be cowed. That’s how guys like him work. They steamroll over everyone by using their connections or their size or the fact that older men in charge might see them as their younger selves. But when a guy like this meets someone who plays the game even better? And it’s a woman He can’t handle it.

The first live dinosaur most people ever saw was a T. rex. When it got loose in San Diego, it changed the world.

But the righteous hardly ever win. And the ruthless do.

“Teamwork and camaraderie across specialties is key to harmony and rooting out problems in a place like this. When you don’t just go to work, you live and breathe and love and lose all in the same place, with no respite? It can wear on you if you don’t have a support system.”

When you narrow yourself down to base instincts, strip everything else away–family, love, loyalty, intelligence–you discover who you truly are.

A difference, to be a difference, must make a difference.
Your moods signal a period of change.
Today it’s okay to make a few choices by going with your instincts.
More Fortunes >