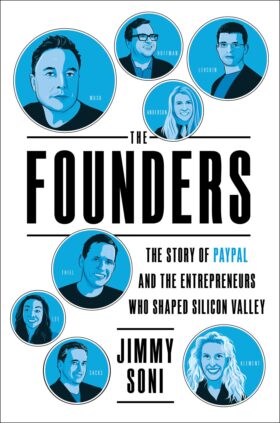 Tagline: The Story of Paypal and the Entrepreneurs Who Shaped Silicon Valley

Declassified by Agent Palmer: The Founders demystifies the dot-com era success of PayPal

“There are so many people who are good at being good to you when things are great, but when shit’s not really working, who do you objectively talk to? [Levchin and Thiel] had each other. They burn so brightly, and so differently. They are one of the best examples of a great partnership.” – John Malloy

“If they’re this bad at innovation, then any company that enters the financial space should not fear that the banks will crush them–because the banks do not innovate,” Musk concluded.

At Pinnacle, the researchers weren’t publishing-or-perishing; they were producing–crafting technologies to change cars forever.

“What do you want to tell your children twenty years from now [when they ask] where you were at the birth of the internet: at a stodgy old bank, or on the front lines?” Payne remembers Fricker telling him.

“There was a huge, huge worry in engineering that any one bad hire could destroy the codebase,” engineer Erik Klein said. “That’s partially our doing, because it’s bad that a codebase can be destroyed so easily. But if you’re coding fast and loose, that’s the codebase that you build. And you create the problem–but then you have to hire people to fit within that problem.”

“Even in the current work I’m doing, we’ll be in standups talking about the situation we’re in, and your mind goes to How can I solve this situation? What is some invention? You learn to ‘invent’ instead of ‘research and implement’” Erik Klein observed.

Both Bezos and Musk knew that one site offering everything trumped five sites offering one thing apiece. This wasn’t an especially groundbreaking insight–the concept of a general store was centuries old. But it took foresight to bring such a thing to life at internet scale, and to do so when customers were still taking their first, tentative steps toward online shopping and banking.

“Attention is finite,” Draper and Jurvetson wrote. “Rising above the noise of a thousand voices requires creativity. Shouting is not very creative. Just hanging up a web shingle and hoping for visitors is not very creative. Rather, new companies can structure their business in a way that allows them to grow like a virus and lock out the existing bricks and mortar companies through innovative pricing and exploitation of these competitors’ legacy distribution channel conflict.”

“I never stopped and thought, Will this work? That question was completely foreign to those years. It was, What can we do? And how fast can we do it?” – Julie Anderson

For all their talk of common foes and outward focus, the company was riven by rivalries fierce enough to make George R. R. Martin blush. Employees regularly called each other out in email threads, and even technical debates evinced an unusual ferocity.

Engineer Santosh Janardhan noted that this approach wasn’t necessarily as risky as it seemed. “There was this phrase thrown around a lot in the early 2000s, which was ‘fix it forward,’” he explained. “Which is, We are committed. We are going out, even if we have to stay all night. It was better to spend the night fixing it than spend the week before having a rollback.”

…experience was no barrier to impact.

“All tech companies,” Listwon quipped, “seem to get caught up in the dumbest little quibbles while solving the world’s biggest problems.”

“World domination,” Sacks concluded, “will not be achieved by indiscriminately parachuting into hostile lands.”

Today, the outsiders who built PayPal are among the most influential insiders in the world of technology and engineering, their utterances decoded, dissected, and debated. They are both leading and investing in companies, and they receive hundreds of pitches per week from up-and-comers full of ideas, ambition, and energy.

“The idea of having meetings where people really liked one another seemed great. That was folly. The mistake was to conflate anger with a lack of respect. People who are smart and energetic are often angry. Not at each other, usually. Rather, they’re angry that we’re ‘not there yet,’ i.e., that they have to solve x when they should be working on some greater problem. Disharmony at PayPal was actually a side effect of very healthy dynamics.”

Nearly all writers face anxiety, imposter syndrome, fear, self-doubt, and related noise, and I am perhaps more than usually susceptible.

“When a company comes up with an idea, it’s a messy process,” Bezos said. “There’s not aha moment.”
“…the point of books like this is to capture that messiness.”