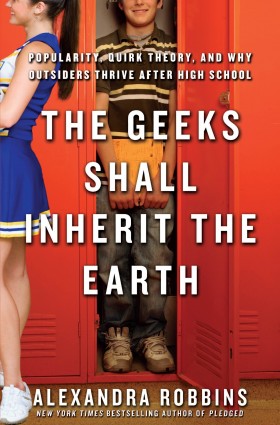 The Geeks Shall Inherit the Earth

Synopsis: This synopsis does not reflect my thoughts on the book. In a smart, entertaining, reassuring book that reads like fiction, Alexandra Robbins manages to crossGossip Girl with Freaks and Geeks and explain the fascinating psychology and science behind popularity and outcasthood. She reveals that the things that set students apart in high school are the things that help them stand out later in life.

Declassified by Agent Palmer: The Geeks Shall Inherit the Earth by Alexandra Robbins full of Misleading Psychology about Outsiders

I generally subscribe to the idea that although both groups are known for smarts and social marginalization, nerds might be inclined toward unusual intellectual pursuits, and geeks toward unusual recreational ones.

The evolution of these labels may be illuminating. Between emo  and indie, labeling is shifting from targeting what a student does–studies hard, dresses darkly, plays a band instrument–to what a student feels. The shifting of labels into personality compartmentalization illustrates the increasing marginalization of students who don’t conform. Suddenly, there are not only acceptable and unacceptable standards of dress, but also standards of being. All of this points to the reason that student bullying is up, self-esteem is down, and social warfare is fierce. The concept of “normal” has narrowed.

Studies have shown that, at least among students, popularity equates with visibility.

As Sacred Heart University psychology chair Kathryn LaFontana observed, “It is interesting that children focus on the quantity rather than the quality of interactions to determine popularity. From a social networks perspective, it seems that children see those peers who have a large number of peer contacts and are more central to the social network as popular.”

[Danielle] preferred not to act phony, so she refused to pretend that shallow topics were interesting or that unintelligent comments were witty. Better to say nothing than to be fake.

Even in some schools in which administrators have funded programs to try to combat bullying or hostilities among student cliques, educators are engaging in those same social behaviors.

To students who worry that people never outgrow cliquish behavior, it’s important to point out that many–perhaps most– people do.

An eight grader in Indiana told me he didn’t mind being labeled a nerd–“it’s a lot better than being a nobody”–but he was tired of feeling like he had to continue to get perfect grades to be socially accepted. “That’s what defines my group, and if I don’t live up to their expectations, I would be letting them down.”

As Concordia University psychologist William Bukowski described, “Insofar as groups require consensus, homogeneity, and cohesion, they eschew individuality, diversity, and independence. As homogeneity and conformity within a group increase, diversity and individuality decrease.”

…the struggle between individuality and inclusion both adds to the confusion of adolescence and counters likely the strongest lure toward groups that they will ever experience in their lives. Which makes it all the more remarkable when a student is bold enough to swim against the tide.

If there is one trait that most cafeteria fringe share, it is courage. No matter how awkward, timid, or insecure he or she might seem, any teenager who resists blending in with the crowd is brave.

Nonconformists, therefore, aren’t just going against the grain; they’re going against the brain. Either their brains aren’t taking the easy way out to begin with, or in standing apart from their peers, these students are standing up to their biology.

…quirk theory assures marginalized young people that someday they will be welcomed for the same reasons that classmates relegate them to what one former outcast called “the land of misfit toys.”

As William Taylor, the founding editor of Fast Company magazine, has written, “The work that matters most [is] the work of originality, creativity, and experimentation.”

At school, Einstein wrote, being bullied gave him “a lively sense of being an outsider.”

“Other scientists had come close to his insight, but they were too confined by the dogmas of the the day. Einstein alone was impertinent enough to discard the notion of absolute time, one of the sacred tenets of classical physics since Newton,” Issacson wrote in a Wired article. What made Einstein special was his impertinence, his nonconformity, and his distaste for dogma. Einstein’s genius reminds us that a society’s competitive advantage comes not from teaching the multiplication or periodic tables but from nurturing rebels. Grinds have their place, but unruly geeks change the world.”

Self-awareness is an authenticity of being. It is a commitment to the values and philosophies that you have already figured out are important to your individual identity. It is an understand of what will make you happy, successful, respected, or valued.

When Yahoo! executives evaluate job candidates, they look for what the company calls the Y-Gene, described as a quality of people who “marvel at life and milk it for all it’s worth. They’re curios and energetic. They value openness and want to live unbridled and unrestricted. They appreciate that life is huge. They don’t settle for the status quo–they want to grow.”

Students are not solely to blame for creating cafeteria fringe or for the selection of which students are treated as such.

As writer-performer Quentin Crisp wrote in his 1968 autobiography, The Naked Civil Servant, “The young always have the same problem–how to rebel and conform at the same time. They solve this problem by defying their parents and copying one another.”

“When I was a teenage, I had a hard time with people wondering why I didn’t want to take the easier path,” Regan said later. “Only as I’ve grown older have I found that people find this characteristic attractive. I think it’s mostly because most people don’t  follow their hearts. Most people do what is expected of them; most people take the path well-traveled, just to get by. Now, in the adult world, when someone meets me, they tend to admire me because I know what I want, I know who I am, and I go for it. Every day when I wake up, I know that my dreams are just beginning.”

All of these people also demonstrated inspiring qualities that are generally representative of the cafeteria fringe across the country. For example, the outsiders did not waste time repainting their images to increase their popularity. In the end, they stayed true to themselves, asserting their uniqueness in the environment that makes it most challenging to do so. Remaining nonconformist in the face of intense social pressure, if not outright harassment, takes dedication, drive, and as previously discussed, courage.

But so many of the students whose labels signify their lack of perceived popularity–emos, indies, freaks, nerds, scenes, loners, floaters, skaters, punks, all manner of geeks and dorks–someday are going to derived practical and/or social advantages from attributes that qualified them for those labels in the first place.

Although so many students have the same things to say, they cross signals in a maelstrom of misinterpretation, then lose sight of each other behind their stereotypes.

No student should be encouraged–by anyone–to change himself until he’s “normal,” a term that says everything and means nothing.

Unshackled by strict yet arbitrary, misguided norms, outcasts can be, look, act, and associate however they want to. And in this ever conformist, cookie-cutter, magazine-celebrity-worshipping, creativity-stifling society, the innovation, courage, and differences of the cafeteria fringe are vital to America’s culture and progress. Which is why we must celebrate them.

Even the greatest of whales is helpless in the middle of a desert.
Your moods signal a period of change.
Nothing in the world can take the place of persistence.
More Fortunes >