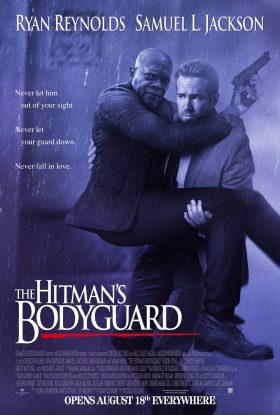 Tagline(s): Everyone’s out to get them… If they don’t kill each other first.
The world’s top protection agent has a new client: His worst enemy.
Never let him out of your sight. Never let your guard down. Never fall in love.
Get Triggered
It’s not the size that matters… It’s how you use it.
In a dangerous world, everyone needs a bodyguard.
The hitman vs the bodyguard, boring vs bold, cool vs covert, cautious vs chaotic, social vs silent, logic vs luck. Hitman or bodyguard, they get the job done.

Synopsis: The world’s top bodyguard gets a new client, a hitman who must testify at the International Criminal Court. They must put their differences aside and work together to make it to the trial on time.

Declassified by Agent Palmer: The Hitman’s Bodyguard is the Comedic John Wick You Didn’t Know you Wanted

Michael Bryce: My job is to keep you out of harm’s way.
Darius Kincaid: Shit, motherfucker. I am harm’s way.

Darius Kincaid: The Bible says to never take revenge, to leave it to the Lord. But I wasn’t prepared to wait that long.

Michael Bryce: I can protect someone from bullets and explosives, but there’s nothing I can do against indiscriminate use of mayonnaise for 68 straight years.

Look forward to great fortune and a new lease on life!
To let another into your heart, first let yourself in.
Fame and fortune are coming your way.
More Fortunes >