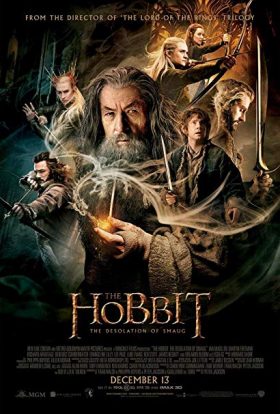 The Hobbit: The Desolation of Smaug

Tagline: Beyond darkness… beyond desolation… lies the greatest danger of all.

Based On: “The Hobbit” by J.R.R. Tolkien

Synopsis: The dwarves, along with Bilbo Baggins and Gandalf the Grey, continue their quest to reclaim Erebor, their homeland, from Smaug. Bilbo Baggins is in possession of a mysterious and magical ring.

Declassified by Agent Palmer: A Movie Review of The Hobbit: The Desolation of Smaug | The Journey Continues

Bard the Bowman: The Lord of Silver Fountains / The King of Carven Stone / The King Beneath the Mountain / shall come into his own. / And the bells shall ring in gladness / at the Mountain King’s return. / But all shall fail in sadness, / and the Lake will shine and burn…

Kili: Tauriel…
Tauriel: Lie still.
Kili: You cannot be her. She is far away. She… she is far, far away from me. She walks in starlight in another world. It was just a dream. Do you think she could have loved me?

Bilbo Baggins: I did not come to steal from you, O Smaug the Unassessably Wealthy. I merely wanted to gaze upon your magnificence, to see if you really were as great as the old tales say. I did not believe them.
Smaug: And do you, NOW?
Bilbo Baggins: Truly, tales and songs fall utterly short of your enormity, O Smaug the Stupendous…
Smaug: Do you think flattery will keep you alive?
Bilbo Baggins: No, no…
Smaug: No, indeed!

Bard the Bowman: You have no right, no right to enter that mountain!
Thorin Oakenshield: I have the only right.

Legolas: Why did you do that? You promised to set him free.
Thranduil: And I did. I freed his wretched head from his miserable shoulders.

Smaug: There is something about you. Something you carry, something made of gold… but far more PRECIOUS…

Bard the Bowman: All of you! Listen to me! You must listen! Have you forgotten what happened to Dale? Have you forgotten those who died in the firestorm? And for what purpose? The blind ambition of a Mountain King, so riveted by greed he cannot see beyond his own desire!

Gandalf: You’ve changed, Bilbo Baggins. You’re not the same Hobbit as the one who left the Shire…
Bilbo Baggins: I was going to tell you… I found something in the Goblin tunnels.
Gandalf: Found what? What did you find?
Bilbo Baggins: My courage.
Gandalf: Good… well, that’s good. You’ll need it.

Thranduil: Such is the nature of evil. Out there in the vast ignorance of the world it festers and spreads. A shadow that grows in the dark. A sleepless malice as black as the oncoming wall of night. So it ever was. So will it always be. In time all foul things come forth.

Smaug: It’s Oakenshield. That filthy Dwarvish usurper! He sent you in here for the Arkenstone, didn’t he?
Bilbo Baggins: No no no no no, I have no idea what you’re talking about…
Smaug: Don’t bother denying it! I guessed his foul purpose some time ago! But it matters not. Oakenshield’s quest will fail. A darkness is coming. It will spread to every corner of the land!

Good clothes open many doors. Go Shopping.
The path of life shall lead upwards for you.
You are interested in higher education, whether material or spiritual.
More Fortunes >