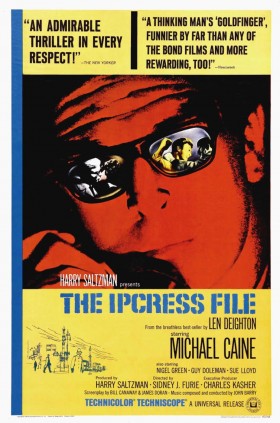 Based On: The IPCRESS File by Len Deighton

Synopsis: In London, a counter espionage agent deals with his own bureaucracy while investigating the kidnapping and brainwashing of British scientists.

Major Dalby: The next time you use CC1 authority, just you make sure you have it!
Palmer: You know, it’s funny… If Radcliffe had been here, I’d have been… a hero.
Major Dalby: He wasn’t. And you’re not.

Major Dalby: The Americans have put a tail on Palmer.
Colonel Ross: How very tiresome of them.

Palmer: The fellow whose job I’m taking, will he show me the ropes?
Major Dalby: Maybe – if you’re in touch with the spirit world.
Palmer: I beg your pardon?
Major Dalby: He was shot this morning.

Raid Inspector: It looks as if all this has been laid on for nothing. That’s not good enough.
Major Dalby: According to Central Clearing House, this operation was timed to start at 2.25. You started at 2.35. *That*’s not good enough!

Colonel Ross: I was counting on you being an insubordinate bastard, Palmer.

Courtney: You’re supposed to be at work.
Palmer: Oh, you are, of course.

Palmer: Have you seen everything?
Courtney: Yes, thank you.
Palmer: Then you know where the… whiskey is?
Courtney: Yes.
Palmer: Fix us both one, will you?

Carswell: Don’t worry, man. You were the only one to come up with anything. He seemed very pleased.
Palmer: Well, he’s got a right comical way of showing it.

Bluejay: See that there’s padding on those straps next time.
Palmer: You want to make it easy for me?
Bluejay: No. For *me*.

Courtney: You know this is unauthorized.
Palmer: My mother gave it to me for Christmas.

Palmer: What are you gonna tell Dalby on your L101?
Courtney: That you like girls.
Palmer: You got that right.
Courtney: You’re not the tearaway he thinks you are. You also like books, music, cooking.
Palmer: I like birds best.

Courtney: Do you always wear your glasses?
Palmer: Yes. Except in bed.

Major Dalby: It isn’t usual to read a B107 to its subject, Palmer; but I’m gonna put you straight. “Insubordinate. Insolent. A trickster. Perhaps with criminal tendencies.”
Palmer: Yes, that’s a pretty fair appraisal – sir.
Major Dalby: Good. That last quality might be useful. But if I have any trouble with you, Palmer, I shall *bite* you, Palmer, and I shall bite you so hard you’ll go right back to where Ross found you!

Palmer: Very neat. Must we sit through any more of this torture? I’ve got a lot of things to do.
Major Dalby: I think they’re playing very well.
Palmer: Tell me who wins.

Major Dalby: And we still have to find Radcliffe, gentlemen. That means more legwork and fewer inspired hunches.

Palmer: You didn’t come here to talk to me about button mushrooms and birds.

The path of life shall lead upwards for you.
Courtesy is the password to safety.
Even the greatest of whales is helpless in the middle of a desert.
More Fortunes >