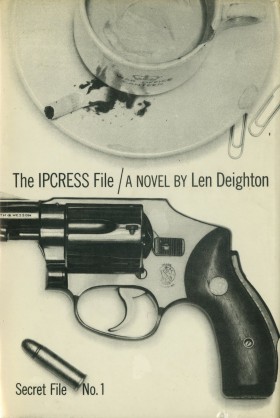 Tagline: What must a lone spy do to survive? The classic spy story that reinvigorated a whole genre!

Main Character: Unnamed or Nameless Spy (a.k.a. Harry Palmer in the film version)

The Ipcress File was not only Len Deighton’s first novel, it was his first bestseller and the book that broke the mould of thriller writing.

For the working class narrator, an apparently straightforward mission to find a missing biochemist becomes a journey to the heart of a dark and deadly conspiracy.

The film of The Ipcress File gave Michael Caine one of his first and still most celebrated starring roles, while the novel itself has become a classic.

Declassified by Agent Palmer: “The IPCRESS File” by Len Deighton is a Masterpiece of Spy Fiction (Spoiler Free Review)

You’d better learn who to confide your weaknesses to before it’s too late.

“I completed a little private task that took an hour of my time about once every two months. I collected a heavy manilla envelope from an address near Leicester Square, inspected the contents and mailed it back to the address from which I had got it.”

It’s only writers who expect every lead the hero meddles in to turn out to be threads of the same case.

“Moving in from opposite ends to the same conclusion,”

Not that I’m any sort of accountant, goodness knows I can make two and two into something different every time I put those particularly unreliable digits together.

“She came into Led’s old broken doorway and into my life like a Royal Scot, but without all that steam and noise. She was dark, calm and dangerous-looking.”

The lunch hour in central London – the traffic was thick and most of the pedestrians the same.

“Our decision to appear rather distant meant a chance of remaining unimplicated–but a feeling of sharpened desire in me that no man should feel for his secretary if he wants to stay in a position to fire her.”

“My desire wasn’t a burgeoning pent-up, explosive fullness, but a gentler, vacant need. Fear brings an edge to physical desire sharper than a Toledo blade and a pitch more plaintive than a Dolmetsch flute.”

“You are loving it here, of course?” Dalby asked.
“I have a clean mind and clean heart. I get eight hours’ sleep every night. I am a loyal, diligent employee and will attempt everyday to be worthy of the trust my paternal employer puts in me.”
“I’ll make the jokes” said Dalby.
“Then go ahead,” I said. “I could use a laugh — my eyes have been operating twenty-four frames per second for the last month.”
Dalby tightened a shoelace. “Think you can handle a tricky little special assignment?”
“If it doesn’t demand a classical education, I might be able to grope around it.”
“Surprise me. Do it without complaint or sarcasm.”
“It wouldn’t be the same.”

“‘A spy has no friends,’ people say; but it’s more complex than that. A spy has to have many friends, in fact many sets of friends. Friends he’s made by doing things and by not doing things.Every agent has his own ‘old boy network,’ it cuts across frontiers, jobs and every other loyalty–it’s a sort of spy’s insurance policy.“

To let another into your heart, first let yourself in.
You are interested in higher education, whether material or spiritual.
A difference, to be a difference, must make a difference.
More Fortunes >