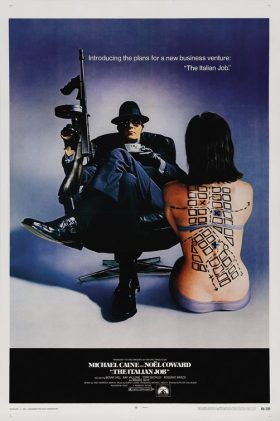 Tagline(s): This is the self preservation society
Introducing the plans for a new business venture: “The Italian Job.”

Synopsis: Comic caper movie about a plan to steal a gold shipment from the streets of Turin by creating a traffic jam.

Declassified by Agent Palmer: 1969’s The Italian Job Is More Than a Bloody Gran Prix

“You’re only supposed to blow the bloody doors off!”

“Charlie Croker, I am dead. I have arranged for my widow to get material to you in England. There you must find the backing to do the job. You must, Charlie. Because it is a work of genius. Just think of it. A city in chaos, a smash-and-grab raid and four million dollars through a traffic jam.”

“It’s a very difficult job and the only way to get through it is we all work together as a team. And that means you do everything I say.”

“Typical, isn’t it? I’ve been out of jail five minutes, and already I’m in a hot car.”

“You wouldn’t hit a man with no trousers on, would you?”

“I don’t want to be rude Charles, but times have changed.”
“Adrian, when I went in that was all the go.”
“What did you do? Life?”
“You know, you could put all these in a museum.”

“Camp Freddie, everybody in the *world* is bent!”

“Charlie you wouldn’t even know how to spell, big!”

“Croker can handle it. He’s got everything going for him. There’s even a football match in Turin the day before the delivery. England versus Italy. The English supporters can cover his movements, even help him, if required.”

“Well, gentlemen, it’s a long way back to England… And it’s thataway!”

“Does Mr Bridger think he can take over Europe from a prison cell?”

“A question of prestige.”

“I can always take it to the Americans… They’re people who appreciate young talent and give it a chance.”

Let’s finish this up now, someone is waiting for you on that.
The path of life shall lead upwards for you.
Today it’s okay to make a few choices by going with your instincts.
More Fortunes >