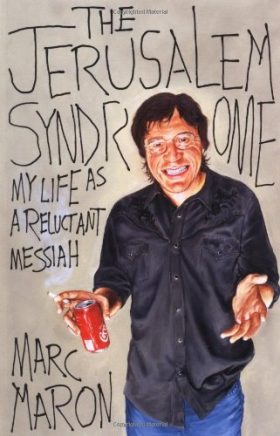 Tagline: My Life as a Reluctant Messiah

Synopsis: The Jerusalem Syndrome is a genuine psychological phenomenon that often strikes visitors to the Holy Land–the delusion that they are suddenly direct vessels for the voice of God. Marc Maron seems to have a distinctly American version of the Jerusalem Syndrome, which has led him on a lifelong quest for religious significance and revelation in the most unlikely of places.

Declassified by Agent Palmer: The Jerusalem Syndrome: My Life As a Reluctant Messiah by Marc Maron is Fantastic

And if there is any core to my faith at all it is that there are no coincidences. [There is no word in Hebrew for “coincidence.”] Nothing happens in God’s world by chance.

He fed on information. He could watch any sport with an equal amount of interest, whether it was football or curling. He knew enough about everything to have an opinion sufficient to converse intelligently in the time afforded him by commercial breaks.

The first time I had actual words with God, he started it.

So what if they kicked me out of Hebrew school? What could happen? I wouldn’t be allowed to be a Jew? So, twice a week, at four in the afternoon, I would go to Congregation B’nai Israel and redefine the phrase “the Jewish problem.”

During my four years at Boston University I was a true Beat adept. I took a course in existentialism during which, with the help of my professor, I erased myself completely and had to rebuild from scratch.

It was time for me to have a go at my own life. I was tired of always assuming that everyone but myself possessed secret information; like some common code of understanding, some idea that tethered their soul and enabled them to get through life with some degree of grace, as opposed to the panic-ridden, angry, tumbling down the pipe that I had experienced.

I saw Hollywood as a mystical Jewish city. It was like the anti-Jerusalem. Think about it. It was built on the same idea as the real Jerusalem. A small group of Jewish kings went into the desert with a crew of crack Jewish writers and created the kabala of the American myth. The movies.

I was living in a comic book, but I had no special powers.

I started to believe that was really the core of my spirituality, American spirituality, brand loyalty. It requires an almost religious faith. You don’t realize how strong that faith is or how deep it runs until it is tested.

Babies are like cocaine to grandparents. The need comes from a deep place. They want one more opportunity to love something that hasn’t disappointed them yet.

I understand Zionism, vaguely. My parents were sofa Zionists; the kind that sit on the couch watching the news and say, “Something’s wrong in Israel. Get the checkbook.”

You are interested in higher education, whether material or spiritual.
Good clothes open many doors. Go Shopping.
Your moods signal a period of change.
More Fortunes >