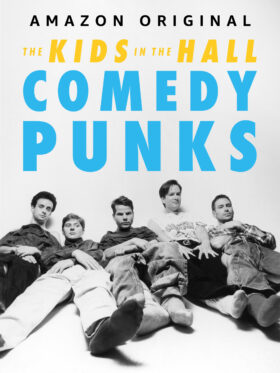 The Kids in the Hall: Comedy Punks

Synopsis: Through never before-seen archive material, interviews with celebrities, industry insiders, rabid fans and the Kids In The Hall themselves.

Declassified by Agent Palmer: The Kids finally get their due respect in The Kids in the Hall: Comedy Punks

“Comedy doesn’t have to come from a quagmire, but a lot of us are broken toys.” – Mark McKinney

“They were like a band that only knew three chords, but they were three great chords and had great energy.”

“Saturday Night Live always covers what’s ripped from the headlines. Kids in the Hall were never about that. They weren’t so much riffing on pop culture. The Kids examined everyday Americana.“ – Michael Musto

“I was just an angsty 20 something year old and Kids in the Hall were kind of the only comedy group that reflected Gen-X.” – Fred Armisen

“ I think that we were very much seen as like, the comic arm of the grunge movement.” – Scott Thompson

Let’s finish this up now, someone is waiting for you on that.
Sharing little joys offer great hope to others.
Your moods signal a period of change.
More Fortunes >