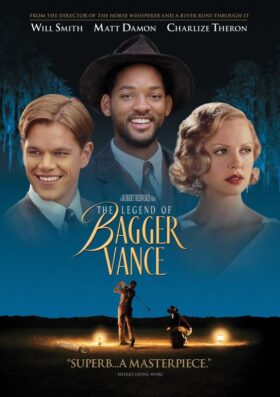 The Legend of Bagger Vance

Tagline(s): Some Things Can’t Be Learned. They Must Be Remembered.
It Was Just A Moment Ago.

Based On: The Legend of Bagger Vance: A Novel of Golf and the Game of Life by Steven Pressfield

Synopsis: A down-and-out golfer attempts to recover his game and his life with help from a mystical caddy.

Declassified by Agent Palmer: 9 Holes with The Legend of Bagger Vance

Rannulph Junnah: Now, the question on the table is how drunk is drunk enough? And the answer is that it’s all a matter of brain cells
Hardy Greaves: Brain cells?
Rannulph Junnah: That’s right Hardy. You see every drink of liquor you take kills a thousand brain cells. Now that doesn’t much matter ‘cos we got billions more. And first the sadness cells die so you smile real big. And then the quiet cells go so you just say everything real loud for no reason at all. That’s ok, that’s ok because the stupid cells go next, so everything you say is real smart. And finally, come the memory cells. These are tough sons of bitches to kill.

Bagger Vance: Yep… Inside each and every one of us is one true authentic swing… Somethin’ we was born with… Somethin’ that’s ours and ours alone… Somethin’ that can’t be taught to ya or learned… Somethin’ that got to be remembered… Over time the world can, rob us of that swing… It get buried inside us under all our wouldas and couldas and shouldas… Some folk even forget what their swing was like…

Bagger Vance: Yeah, a golf course puts folks through quite a punishment. It lives and breathes just like us.

Rannulph Junuh: This is getting embarrassing.
Bagger Vance: Oh no sir, this has been embarrassing for quite some time now.

Rannulph Junuh: You feelin’ sorry for yourself because your daddy’s got to sweep streets?
Hardy Greaves: He ain’t the only man who can’t get work. Wilbur Charles’s dad can’t get work neither, but he says he’d rather do nothin’ at all than something beneath his dignity.
Rannulph Junuh: Grow up, Hardy.
Hardy Greaves: It ain’t time for me to grow up, Mr. Junuh.
Rannulph Junuh: Your daddy’s out sweepin streets because he took every last dime he had and used it to pay up every man and woman he owed and every business who worked for him, instead of declaring bankruptcy like everyone else in town, including your best friend Wilbur Charles’s dad, Raymond, which is why he’s able to sit around all day long on his dignity. Your daddy stared adversity in the eye, Hardy, and he beat it back with a broom.

Hardy Greaves: It’s fun. It’s hard. You stand out there on that green, green grass and it’s just you and the ball, and there ain’t nobody to beat up on but yourself. Just like Mr. Noonan keeps hittin’ himself with a golf club every time he gets angry. He’s broken his toe three times on account of it. This is the only game I know you can call a penalty on yourself if you’re honest, which most people are. There just ain’t no other game like it.

Bagger Vance: What I’m talkin about is a game… A game that can’t be won only played…

Bagger Vance: Ain’t a soul on this entire earth ain’t got a burden to carry he don’t understand.

Bagger Vance: But there’s only one shot that’s in perfect harmony with the field. One shot that’s his. Authentic shot. And that shot is gonna choose him. There’s a perfect shot out there tryin’ to find each and every one of us. All we got to do is get ourselves out of its way. Let it choose us.

Bagger Vance: Your hands is wise than your head ever gonna be.

Sharing little joys offer great hope to others.
Courtesy is the password to safety.
The path of life shall lead upwards for you.
More Fortunes >