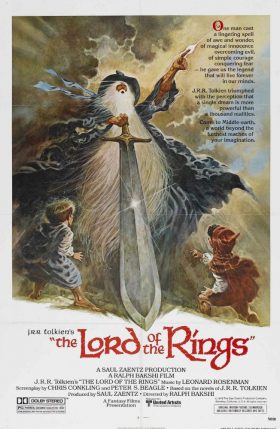 The Lord of the Rings (Animated)

Tagline(s): Come to Middle-earth, a world beyond the furthest reaches of your imagination.
Fantasy…beyond your imagination
From J.R.R. Tolkien’s Magical The Lord of the Rings Trilogy

Based On: Based the novels of J.R.R. Tolkien

Synopsis: The Fellowship of the Ring embark on a journey to destroy the One Ring and end Sauron’s reign over Middle-earth.

Declassified by Agent Palmer: Rotospective: The Lord of the Rings directed by Ralph Bakshi is truly an Epic piece of Cinematic Art

“One ring to rule them all; one ring to find them. One ring to keep them all, and in the darkness bind them!” – Gandalf

Legolas: So all you had to do was say friend… and enter.
Gilmi: Those were happier times…

“Because it is altogether evil. It will corrupt and destroy anyone who wears it, until he passes into the world of shadows under the power of Sauron, the Dark Lord of Mordor.” – Gandalf

Frodo Baggins: Because of Gollum! Oh, Gandalf… what am I to do? What a pity that Bilbo didn’t kill that vile creature when he had the chance.
Gandalf: Yes, it was pity. Pity and mercy.

Frodo Baggins: I don’t know Sam, I think one of the Enemy’s spies would look fairer and feel fouler.
Aragorn: While I look foul and feel fair is that it?

“No! Do not tempt me! I would wish to turn it to good, and it cannot be used so! Meaning to be kind, I would become as terrible as the Dark Lord himself. Do not tempt me!” – Gandalf”

“It is time for us to choose. A new age is upon us, a new power is rising. Nothing that Elves or Men or Wizards can do will avail against it. Its enemies are utterly doomed, but its friends…” – Saruman

Frodo Baggins: I wish it need not happen in my time.
Gandalf: So do I.

“There no one else for them take up with except a fat innkeeper who only remembers his name because people shout it at him all day.” – Aragorn

“Long ago, in the early years of the Second Age, the great Elven-smiths forged rings of power. Nine for mortal men, seven for the Dwarf lords, three for the tall Elf Kings. But then, the dark lord learned the craft of ring making and made the Master Ring, the one ring to rule them all. With the One Ring, Middle-Earth was his, and he could not be overcome. As the last alliance of men and Elves fell beneath his power, he did not notice the heroic shadow who slipped in. It was Prince Isildur, of the mighty kings from across the sea, who took the ring. But because he did not destroy it, the spirit of the dark lord lived on, and began to take shape and grow again. But the ring had a will of its own, and a way of slipping from one hand to be found by another, so that it might at last get back to its master. And there, the ring lay at the bottom of the great river Anduin for thousands of years. During those years, the dark lord captured the nine rings that were made for men and turned their owners into the Ringwraiths. Terrible shadows, under his great Shadow, who roamed the world… searching for the One Ring. In time, the Ring was found.” – Gandalf

“My name is Aragorn, son of Arathorn. If by life or death i can save you, i will.” – Aragorn

“He used the Ring for thieving, and to find out secrets. His own people began to despise the wretched creature and to call him Gollum. Tortured and driven by the ring, he hid in dark caves… and a deep mountain. But the ring slipped off Gollum’s finger, too. And so it was that Bilbo found it during his travels with the Dwarves.” – Gandalf

Nothing in the world can take the place of persistence.
A difference, to be a difference, must make a difference.
To let another into your heart, first let yourself in.
More Fortunes >