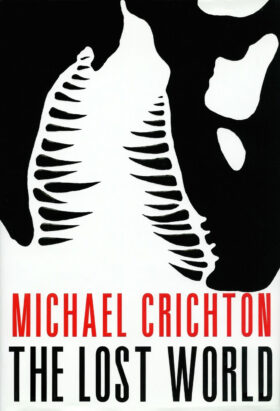 Tagline: Something has survived.

Synopsis: “It is now six years since the secret disaster at Jurassic Park, six years since that extraordinary dream of science and imagination came to a crashing end–the dinosaurs destroyed, the park dismantled, the island indefinitely closed to the public. There are rumors that something has survived.”

Declassified by Agent Palmer: Crichton’s The Lost World is Espionage, Extinction, and Evolution

“What really interests me is whether God had any choice in the creation of the world.”
Albert Einstein

Complex systems tend to locate themselves at a place we call ‘the edge of chaos.’ We imagine the edge of chaos as a place where there is enough innovation to keep a living system vibrant, and enough stability to keep it from collapsing into anarchy. It is a zone of conflict and upheaval, where the old and the new are constantly at war. Finding the balance point must be a delicate matter—if a living system drifts too close, it risks falling over into incoherence and dissolution; but if the system moves too far away from the edge, it becomes rigid, frozen, totalitarian. Both conditions lead to extinction. Too much change is as destructive as too little. Only at the edge of chaos can complex systems flourish.” He paused. “And, by implication, extinction is the inevitable result of one or the other strategy—too much change, or too little.”

“What makes you think human beings are sentient and aware? There’s no evidence for it. Human beings never think for themselves, they find it too uncomfortable. For the most part, members of our species simply repeat what they are told–and become upset if they are exposed to any different view. The characteristic human trait is not awareness but conformity, and the characteristic result is religious warfare. Other animals fight for territory or food; but, uniquely in the animal kingdom, human beings fight for their ‘beliefs.’ The reason is that beliefs guide behavior, which has evolutionary importance among human beings. But at a time when our behavior may well lead us to extinction, I see no reason to assume we have any awareness at all. We are stufforn, self-destructive conformists. Any other view of our species is just a self-congratulatory delusion. Next question”

“Self-organization elaborates in complexity ass the system advances toward the chaotic edge.”

Malcolm had long been impatient with the arrogance of his scientific colleagues. They maintained that arrogance, he knew, by resolutely ignoring the history of science as a way of thought. Scientists pretended that history didn’t matter, because the errors of the past were now corrected by modern discoveries. But of course their forebears had believed exactly the same thing in the past, too. They had been wrong then. And modern scientists were wrong now.

“In the intermediate phase, swiftly developing complexity within the system hides the rist of imminent chaos. But the risk is there.”

“God is in the details,” Levine once reminded him.
“Maybe your God,” Malcolm shot back. “Not mine. Mine is in the process.”

“So, Kelly, even at your young age, there’s something you might as well learn now. All your life people will tell you things. And most of the time, probably ninety-five percent of the time, what they’ll tell you will be wrong.” – Sarah Harding

“That’s the greatest single scientific discovery of the twentieth century. You can’t study anything without changing it.” – Malcolm

“At the edge of chaos, unexpected outcomes occur. The risk to survival is severe.”

“Ian,” she said, looking at him. “This sincerity is not like you.”
“It’ll pass,” he said, and smiled a little.

“That life is so unbelievably complex,” Malcolm said. “Nobody realizes it. I mean, a single fertilized egg has a hundred thousand genes, which act in a coordinated way, switching on and off at specific times, to transform that single cell into a complete living creature. That one cell starts to divide, but the subsequent cells are different. They specialize. Some are nerve. Some are gut. Some are limb. Each set of cells begins to follow its own program, developing, interacting. Eventually there are two hundred and fifty different kinds of cells, all developing together, at exactly the right time. Just when the organism needs a circulatory system, the heart starts pumping. Just when hormones are needed, the adrenals start to make them. Week after week, this unimaginably complex development proceeds perfectly—perfectly. It’s incredible. No human activity comes close.”

“…Although personally, I think cyberspace means the end of our species.”
“Yes? Why is that?”
“Because it means the end of innovation,” Malcolm said. “This idea that the whole world is wired together is mass death. Every biologist knows that small groups in isolation evolve fastest. You put a thousand birds on an ocean island and they’ll evolve very fast. You put ten thousand on a big continent, and their evolution slows down. Now, for our own species, evolution occurs mostly through our behavior. We innovate new behavior to adapt. And everybody on earth knows that innovation only occurs in small groups. Out three people on a committee and they may get something done. Ten people, and it gets hard. Thirty people, and nothing happens. Thirty million, it becomes impossible. That’s the effect of mass media–it keeps anything from happening. Mass media swamps diversity. It makes every place the same.

“Other collapses in simultaneous regions. Survival is now unlikely for individuals and groups.”

“All your life, other people will try to take your accomplishments away from you. Don’t you take it away from yourself.” – Sarah Harding

From Acknowledgement: It remains only to say that the views expressed in this novel are mine, not theirs, and to remind the reader that a century and a half after Darwin, nearly all positions on evolution remain strongly contended, and fiercely debated.

Fame and fortune are coming your way.
Today it’s okay to make a few choices by going with your instincts.
Sharing little joys offer great hope to others.
More Fortunes >