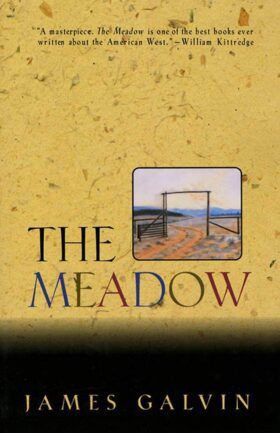 Synopsis: “In discrete disclosures joined with the intricacy of a spider’s web, James Galvin depicts the hundred-year history of a meadow in the arid mountains of the Colorado/Wyoming border. Galvin describes the seasons, the weather, the wildlife, and the few people who do not possess but are themselves possessed by this terrain. In so doing he reveals an experience that is part of our heritage and mythology. For Lyle, Ray, Clara, and App, the struggle to survive on an independent family ranch is a series of blameless failures and unacclaimed successes that illuminate the Western character. The Meadow evokes a sense of place that can be achieved only by someone who knows it intimately.”

Lyle’s thinning hair is the color of last year’s grass next spring, fresh under the long snow. He cuts it himself, so it’s always nebulous on top and hacked away in patches above the back of his neck, which is red with chain link creases.

Lyle sits alone during lunch because he is embarrassed by his sandwiches, which are made from homemade bread, the badge of poverty. The other kids have Sunbeam.

When we think of our lives as what we have done, memory becomes a museum with one long shelf on which we arrange a bric-a-brac of deeds, each to his own liking.

Hazel also meded their torn shirts and worn-out shoes, darned socks, and pieced quilts from scraps of clothing too far gone to mend. She wasted nothing, or to be more precise, she wasted no things.

Though it might have irony, the truth is never funny.

At a certain point you keep going to see what happens next.

He knows that under circumstances in which well-being is not a possibility, the illusion of well-being is a matter of life and death.

“They ought to e-races the human race and put something good on here. When I get down to hell I’ve got a few questions for that Devil, real sticklers, like how come they let people into this world when it would have been perfect without them. I mean if you imagine the natural world without the human race, you are thinking of something perfect, perfectly balanced, that just keeps going. Only thing as messes it up is the people. Especially when they try to manage things. The more of ‘em there are the worster it gets. Now how come they done that? That’s going to be the first question. After that there’s the long list and the short list, depending on if he’s got the time, which I imagine he’s got aplenty of, but you never know if he takes questions or not.” – Ray

Lyle listens. He knows all this, but that doesn’t make it any less interesting. It isn’t what people say, he thinks; how they say it is what really tells you what they’re talking about. His sour mood is not the result of disagreeing–in fact, quite the opposite. Lyle hates it when Ray says things he agrees with.

He never quite prospered but he made it to comfortable.

Paul Harvey says the National Weather Service, with all their satellites, balloons, computers, and color-coded maps, has a 60 percent accuracy rate. Sixty percent. That’s 10 percent better than flipping a coin. November of 1974 they predicted light snow flurries and we got thirty-one inches in one night. I’ve heard them say sunshine when it was raining on the radio station.

“You never outgrow the way you grew up…”

Lyle learned to pay attention, to think things through and not get ahead of himself, not to lapse into inattention ever. After a while he couldn’t not pay attention, shaking a stranger’s hand, tasting Mrs. So and So’s pickles, setting fenceposts. It endowed all his actions with precision. It gave him total recall. It obliterated time.

Nothing in the world can take the place of persistence.
Courtesy is the password to safety.
Sharing little joys offer great hope to others.
More Fortunes >